Is this question about Boners too simple for E.L.U. or not, and if it is, should it be migrated to E.L.L?

We were just having a little debate about the question What does it mean to give someone boners? in chat, and it strikes me as a rather borderline case. The matter under consideration was whether or not enough research had been conducted, and how obvious that research is too obvious for consideration.

On the one hand, the word Boner is the oddest word in the sentence, and it could be reasoned that research for this specific word should have been conducted first. Precise research was not included in the body of the question, and no dictionaries were checked. Any effort to find out what the word "Boner" itself means probably would have made the intended meaning clear, given the context of the statement. Our help center also suggests the following:

Note that you should also include your own research into the query. The example indicates that a little research may have been done with "Should it be a continuous-aspect verb?", but research is needed.

Based upon the criteria in the provided link to the How Much Research is Needed meta question, it seems as if it was not enough to really show that the research was done.

On the other hand, our questioner indicated that they had performed a google search, which did not help them. This is more than many of our newer questioners do and a failure to find results suggests that it should pass the first test provided in Are Some Questions Too Basic. The problem to me seems to be that the questioner thought they were looking for an idiom, rather than an individual word because the phrases tag was used, and he was thus unable to isolate the word boner from the sentence.

A google query for the phrase "give someone boners" seems like the most probable query given the title of the question, and it only returns only one immediately visible result for me, other than the question itself on English Language & Usage: 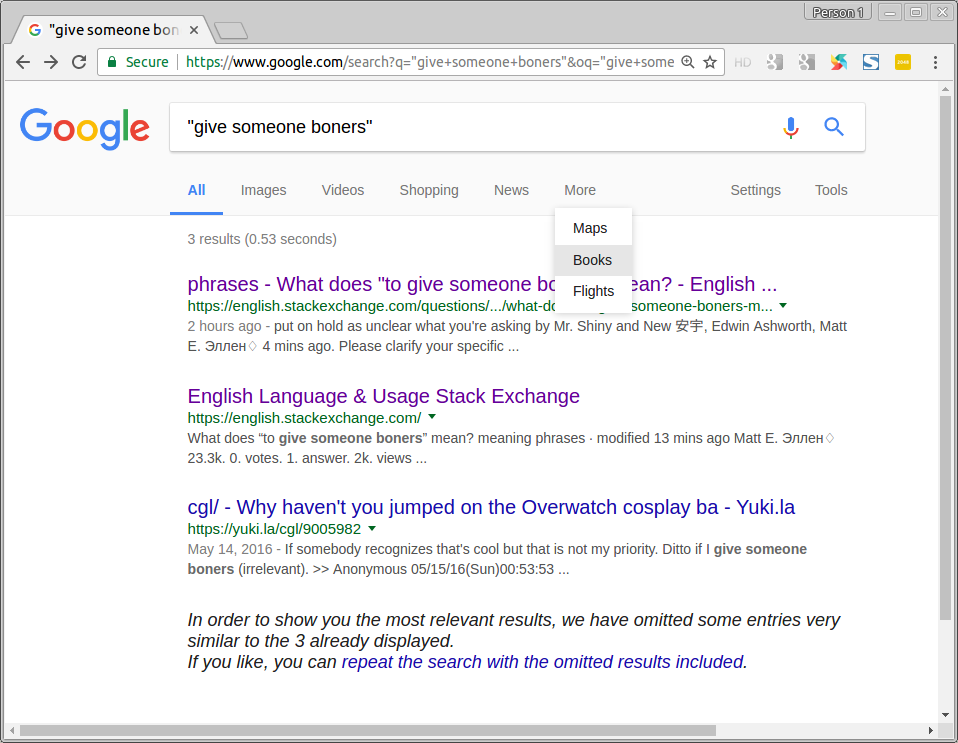 The yuuki.la result is not a very definitive resource even for its subject, which is not English and does not really attempt to explain the phrase even if it was. A more helpful link does appear if you click on the more results link, but Google strongly implies that it's not a helpful result. As a result, answering this question might actually be somewhat more productive than it seems.

It should also be considered that perhaps it would be a good candidate for English Language Learners (E.L.L.). It requires some rudimentary skill in English to be able to answer this question, in order to recognize the form of the sentence, which is something somebody who is just learning might not have, but it is a question that the average speaker would have probably found the answer to easily.

Then again, some rudimentary skill in English is necessary to use even E.L.L., and they also have a research requirement of sorts, although I do not know the details regarding that research requirement since I mostly just participate on English Language & Usage myself. We should also keep in mind that E.L.L. tends to be frustrated with some of our suggested migrations, as suggested by one of their moderators, Snailplane, in the meta question A Friendly Reminder, E.L.L. is not E.L.U's. Trash Can, so we should exercise some cautious discrimination on the matter.

The question, as asked, provided no context and no explanation for why the asker was asking, and we can thus only conclude that they are asking for the meaning of a phrase of the form "give someone X", which IMHO is definitely too basic to be asking here. The OP mentioned, in passing, having done a Google search, but I find it incredible that a search for "boner" would yield no results. In any case, the minimum bar for a question is not "did I find it on Google", but rather, "Did I find it in a dictionary".

Given the accepted answer merely states the meaning of the word, this question is too basic for EL&U and I'd say also too basic for ELL. It should be closed as Off-topic: please show the research.

Similar questions asking for deeper meanings, metaphors, or listing found definitions and inquiring about further confusion would be allowed but this question does not have those features.

102
A friendly reminder: ELL is not EL&U's trash can
62
Basic questions are not so basic
21
How much research is needed?
5
Re-open request: "Stick vs aerosol" question