I've never seen such a reaction to a question on ELU as to What does “covfefe” exactly mean?

100k views in a single day, and probably more to come. The question was put on hold at around 70k views but, unlike all other question which generally slow down and exit from the Hot Network Questions, this one kept the pace and never stopped.

What are the dynamics here? What's keeping this question so active? Why is it behaving differently from all other HNQ questions?

It means it got a high rank in Google for some common searches. It's number 3 on the Google searches for "covfefe meaning" and "what does covfefe mean" at the moment: 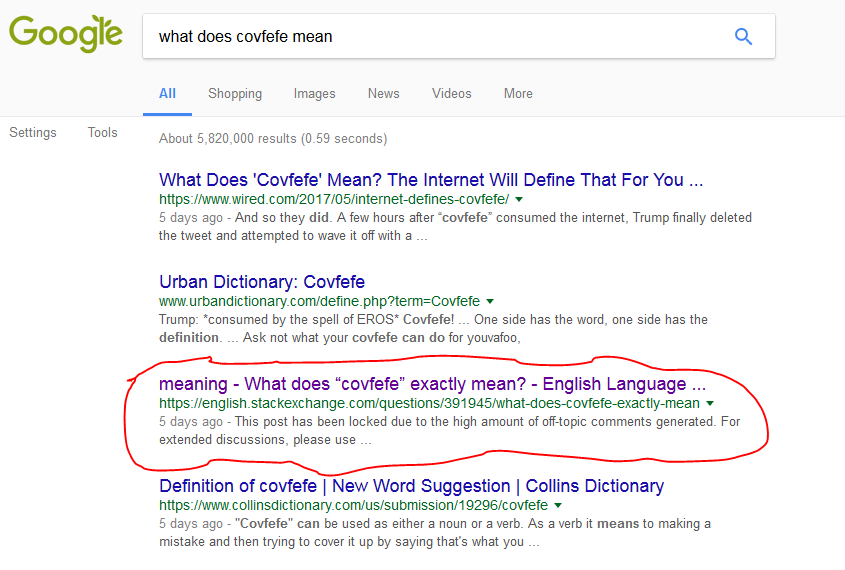 While some users may not be especially proud of this particular question, this is a good sign for the site. It means that Google is ranking English.SE highly and drawing traffic for people trying to understand what words and phrase mean. Congratulations on your success!

I've been pondering this as well. Since the question was posted, I saw strong arguments for closing the question and now also for reopening it.

On the one hand, the typo itself and the question as phrased have nothing to do with English. No one had heard of "covfefe" before Trump finger-mashed it into existence on twitter. If we analyzed every typo that landed on the Internet, we'd have our hands full.

On the other hand, the level of interest in an "accidental" word has never been so high. This is uncharted territory in the field of words. All search engines have placed this post high on a query for "what does covfefe mean?" It's difficult to argue that the people who click on that top link – ours – benefit more from seeing "on-hold as off-topic" than would benefit from the aggregate thinking of the site. Although the question yielded some rubbish answers that were downvoted six-feet below the footer, it also yielded some interesting answers, including a computer program analyzing likely words that would yield such a typo.

Who knows what else thoughtful users might have come up with?

Yes, full disclosure, I answered as well. But I don't care if people vote my answer up or down (I'm about to give away all my points from that answer in a bounty anyway). I'm just curious what potentially good answers might be missed because the post is closed.

People will likely downvote this answer, and I'm fine with that. I fully understand the desire to keep the site serious and the sentiment that questions like this stray from that goal, I just can't help but marvel at the interesting position the site is in by receiving so much attention.

It's a typo from the leader of the free world, who's always in the news, for some bad thing or something worse, and this typo was a funny story, which gave people a break from all the boring scandals and "fake news" and stuff, and naturally, people just took it up and ran with it, all day, every channel, covfefeying the news out of it.

It's gained more views from Google than it did from HNQ, and I don't​ know it for a fact, I just know it's true.

As you mentioned, my question about “covfefe” in Mr. Trump’s tweet attracted 100k views in the first day, and it built up to 257k views as of today. The gross 257k number far surpasses the total number of 156k users of EL&U, which means more than a half of the visitors to my question were coming from Google or other online sources.

When I searched for the word, “covfefe” on Google before posting the question (on May 31st 22:05, according to EL&U), there wasn’t any headings relevant to this word, and that’s why I posted this question in EL&U to get a clue.

I left home at 09:30 after posting the question, and I was surprised to find around 70k views on my post when I came home around 15:00.

I think a large part of the visitors approached Google at first to get the meaning of the word, “covfefe,” and found my question at the top of the search results, and then came to EL&U to look for my question.

A user ridiculed me in his answer: It means "a method for increasing your English.SX reputation overnight by leveraging Donald Trump's gaffes," which was later deleted by a moderator.

I think the unconventionally large number of views to my question is simply because it’s the word given publicly (and officially?) by the President of the United States of America, not the word of common people like you and me. The word turned into a monster meme and is walking around the world. You cannot laugh it away as a mere typo. It starts to have a meaning of its own.

6
Is there a better alternative to using low-vote answers for discussion?
1
Why was this off topic?

7
What does "usage" mean in "English Language and Usage"?
4
What does "not an answer" mean?
86
This is not a site for "serious English language enthusiasts," and it never will be
0
What does "on hold" on Stack Exchange mean?
3
User suspended because her English is not fluent. That was a bit mean
10
What the "primarily opinion-based" close reason is for
3
What does it mean to be downvoted?
4
Questions about "what does that sentence mean"