Internet resources to research frequency of usage of a word

I am curious about how often the word gaslighting (in the contemporary sense of "a form of manipulation through persistent denial, misdirection, contradiction, and lying in an attempt to destabilize and delegitimize a target" — Wikipedia as represented in TFD) is being used compared to other years in the preceding century. It seems to me that it might be on the uptick in the last decade, but I have no evidence that it is.

I am particularly interested if the question can be answered using an online resource similar to Google Books Ngram Viewer. I'm hoping for an answer that uses an online resource or resources to show authoritative frequency statistics, year-by-year, for use of gaslighting in journals, popular magazines, newspapers, or online counterparts.

I would especially like to know how much more often gaslighting is used in the last couple years compared to 20 years ago and 50 years ago. Before 1944, I would expect that "gaslighting" would be about lighting a room with liquid propane or natural gas.

It is not entirely clear from your question whether your problem with using Google Ngrams is that the data is not recent enough or that it is based on formal writing (books only), or both. But there are a number of other publicly accessible corpora that might suit your needs:

The Corpus of Contemporary American English has data from 1990 to 2015, and includes transcripted speech (from TV and radio), popular magazines, newspapers, and journals as well as fiction.

The Corpus of American Soap Operas is based on a smaller data set but runs from 2001 to 2012 and is good for exploring more colloquial/informal speech, albeit scripted rather than real-world.

The News on the Web (NOW) corpus is a very large corpus of some 5 billion words covering roughly the last decade of online news reports. It can be downloaded in its entirety free of charge.

And there is also a more or less up-to-date Wikipedia Corpus based on around 2 billion words from the 4+ million articles of the famous encyclopaedia website.

The number of times an event or character occurs in a given sample; also (the relative frequency or proportionate frequency), this number expressed as a proportion of the total possible number of occurrences.

You may not find that the results meet your goals; the precision is rough if it can be called precision at all, and numerous caveats pertain. For the word you've chosen, 'gaslighting', any comparison will be estimates of estimates, and the results far from statistically precise.

For example, 'gaslighting' in the sense of interest to you (the verb with the specific meaning of "a form of manipulation") is first attested with that sense in 1965 (OED). That is barely more than 50 years ago, and it is reasonable to assume that frequency (in the statistical sense given above) at that time would've been quite low.

The tools to use for the comparison, additionally, would need to be used in combination. COCA, COHA and NOW, especially, could be useful to inform an estimate of the relative frequency of use of 'gaslighting' during the time periods you've specified and in the 'genres' of interest ("journals, popular magazines, newspapers, or online counterparts").

Those corpora, and particularly the genre-balanced COCA and COHA, do allow, generally speaking, comparisons of frequency for specific time periods and in particular genres: the genres balanced, however, are only fiction and nonfiction books, magazines and newspapers for COHA, and spoken, fiction, magazine, newspaper and academic publications for COCA. NOW is useful only for online news publications.

Additionally, the time periods covered by COCA (1990-2015), COHA (1810-2009) and NOW (2010-yesterday) would make comparisons a matter of using all three corpora to find an estimated frequency for 50 years ago (COHA), 20 years ago (COHA and COCA), and the "last couple of years" (NOW). Only one genre or, fudging it, possibly two genres, namely news[papers] and magazines, is available in all three corpora.

In the case of 'gaslighting', the general imprecision of any results may be balanced by features of the three corpora that allow examination of uses in context, by period. So, false positives for 'gaslighting', that is uses of 'gaslighting' in other senses than the target sense, can be readily identified and discarded from consideration. 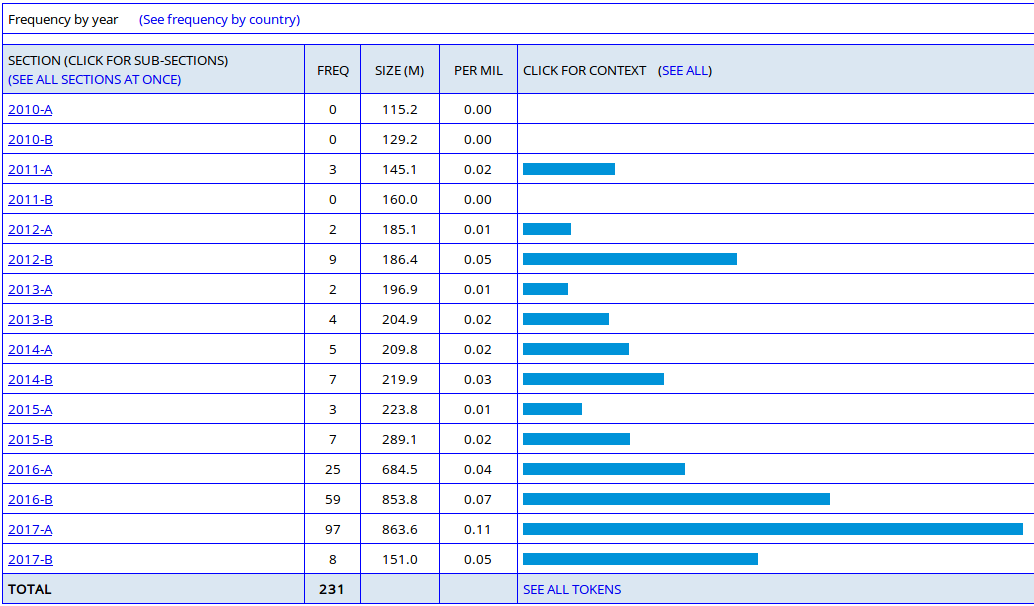 There being only 231 occurrences in the NOW corpus works in your favor. Each occurrence can be seen in context by clicking the bar in the chart (or click "SEE ALL TOKENS" to see them all at once). Here are the occurrences from 2017B (the last half of 2017; at present, this is only July):

The context reveals all occurrences are used with your target sense; the display also shows exact date and country of use, along with the particular venue.

Similarly, all occurrences from 2017A are in your target sense. Those, 2017A and 2017B were the only sections I examined for the purposes of this answer. Other sections could be examined, however, and false positives could be discounted from the relative frequency as shown on the chart.

Comparing the chart from NOW for 2010-2017 with a chart for occurrences from 1990-1997, 20 years ago is quite simple: no occurrences in any genre are recorded. Two occurrences do appear in 1998. Here they are in context:

One occurrence is in the target sense, and it appeared in a popular magazine (albeit with a pseudo-scientific focus).

The same techniques can be applied to find the relative frequency of use of 'gaslighting' in your target sense 50 years ago (0.0, because it doesn't appear in the corpus), by comparing results from the COHA corpus.

Not the answer you're looking for? Browse other questions tagged discussion online-resources .

12
What sort of resource request questions do we accept on meta?