Is SE enforcing "no answers in comments"?

The practice of commenting with answers is ubiquitous practice on ELU, and the merits/flaws have been discussed at length. However, is it the case that the greater SE is trying to put a stop to this practice? This removed comment suggests to me that this might be the case.

(comments removed) If you have an answer, please post it below. Comments do not have the feature to properly vet whatever you say here so without activity like proper voting and wiki-style editing of content, answering here defeats the purpose of having this Stack Exchange site. – Robert Cartaino ♦

There is no new initiative to eliminate answers in comment. They have always been discouraged.

The purpose of Stack Exchange is to get expert, peer-reviewed answers to good questions out on search engines for the benefit of the asker and anyone else with a similar question. Answers in comments cannot be downvoted. Lacking full peer review, they are are really not so helpful to the author as you might think.

Answers in comment are also not indexed by search engines, so they don’t attract future visitors nearly as much as an actual answer post. And, while they might stick around for years, you never know when comments will be silently purged from a question. Comments are truly local and transient. So an answer in comment might never help anybody else.

“request clarification from the author; leave constructive criticism that guides the author in improving the post; [or] add relevant but minor or transient information to a post (e.g. a link to a related question, or an alert to the author that the question has been updated”. ¹

The help page I’m quoting here goes on to say that “comments are not recommended for:

“… answering a question or providing an alternate solution to an existing answer; instead, post an actual answer (or edit to expand an existing one)”

All this being said, it is also true that this site gets its share of off-topic questions that will soon get closed and deleted – questions which will never be helpful to future visitors anyway. Some of our experts will often post a quick comment on such a question, when they see an opportunity to informally help the author. This practice has always been tolerated, and I personally don’t see a reason to discourage it.

I need to write this in an answer because — although it might be a comment — it needs an image and I can't decide what actually to add a comment to.

Please do not flag "for moderator attention" comments which you feel should really be answers. If a comment shouldn't be there, use the "chatty or otherwise unnecessary" flag type: 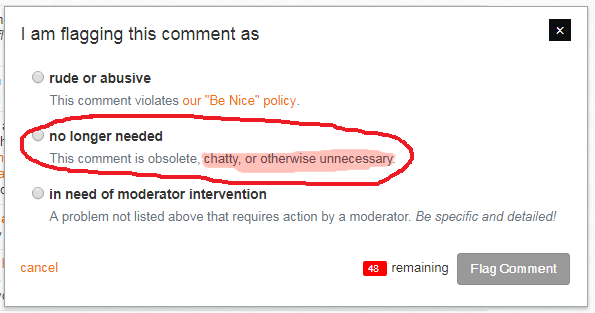 Answering in comments is something the community can police for itself: if three users feel a comment should not be present and use this flag type, the system removes the comment. It really does not need moderators to do that.

Moderators do see these "no longer needed" flags, but the community can also help to deal with them. Answering in comments is not something that only moderators can deal with, which is what the last option is for.

The comment you linked in your question is for a site that is in public beta phase. When sites are in private beta phase, or public beta phase, it's normal for Stack Exchange staff, especially Community Coordinators, to chime in and close questions or remove comments. That is because, in those phases, a site doesn't normally have moderators, who are normally appointed later in the public beta phase.

The fact a Community Coordinator removed comments doesn't mean that suddenly comments are not welcome on Stack Exchange. As the privilege page for comment everywhere says, comments are temporary notes, which should be used for specific purposes:

They should not be used for the following:

In particular, long discussions trigger an automatic flag for moderators of the site (which, for a beta site, normally are Community Coordinators) who can remove the comments, or move them to a chat room, if they feel the comments should be preserved for a bit longer.

As for answers given as comments, Stack Exchange is not enforcing the no answers as comment policy. Clearly, in a Q&A site, the continuous use of comments to write an answer, especially when done from more users at the same time and for the same question, would be problematic, since:

Stack Exchange aims to be a repository of knowledge. It would not be possible to achieve this if blatantly wrong answers are at the same level with other answers, and if the OP would not be able to accept an answer. So, yes, Stack Exchange doesn't like much answers given as comments.
That is also one of the reasons why users are able to comment on questions asked by other users much later than they are able to write an answer. They give the ability to write comments when users possibly understood when to use comments. In a site in beta phase, where the reputation necessary to comment and do other things is lower than in sites out of the beta phase.

That said, there are cases where you can see users writing answers in comments, probably because:

Not the answer you're looking for? Browse other questions tagged discussion comments policy .

13
How to handle old questions with answers stuck in a comment?
0
Should we promote partial answers?

13
Why was this comment deleted?
25
I "really" want a deleted post back
1
Does it really make sense that commenting requires more reputation than answering does?
16
Should we be leaving comments discouraging users from answering off-topic questions?
5
Qualitative 'boundaries' for what it means to answer in comments
6
What is the current policy for answering questions?