Suspensions That Are Too Harsh

I have a feeling this question will get a lot of downvotes... Here it goes.

The other day, I received an e-mail from moderation saying that my account had been suspended for seven days. Because of long discussions.

We've noticed that you have a pattern of engaging in lengthy discussions in comments, frequently consisting of responses involving multiple, back-to-back posts. Comments are intended as brief messages to provide feedback, add minor information, ask for clarification, or discuss the content of the post. Lengthy clarifications should be edited into the post itself or posted separately as a new question or answer, and extended discussions should be taken to chat. Extensive comment threads tend to be a distraction for other readers. These lengthy discussions are often hard to follow, and can easily hide critical information.

Preferring to argue with other users in comments over revising your questions and answers to address their concerns is a red flag to moderators, indicating you may not fully understand the purpose of Stack Exchange: our goal is to provide readers with expert questions and answers, not host discussion or debate. If you desire conversation, stop into the site's chat room.

We hope that you can work with the community on achieving our goals by:

Asking specific, researched, relevant, on-topic questions Providing clear, useful, accurate and well-researched information in answers Treating others with respect and civility We have temporarily suspended your account; you may return after 7 days.

Come on, a week for that? And the second slap in the face was that moderation ignored all messages I sent.

Yep. I sent three e-mails using the contact form and two messages replying to the moderator messages they sent me, which means I spent seven minutes of my life talking to a brick wall.

Situations that I think immediately qualify for 7-day suspensions:

The reason was for my suspension was totally accurate, but seven days? An hour to a day would be more appropriate. Hopefully I'm not alone.

I wanted to let you know that we've observed some rudeness in your latest activity. We get it; anyone who's ever tried to engage with others online has probably been tempted to lash out at someone else. This is just a friendly reminder that we require all participants to act in a professional and civil tone when using these sites. If another user has wronged you in some way, please do not respond in kind. Simply flag the content for moderator attention and move on.

If this is a simple misunderstanding, no harm done. Sometimes it is helpful to remind ourselves on occasion that keeping things friendly and constructive doesn't have to be at odds with being right — so enjoy the site, bring your sense of humor, and please be tolerant of others who may not know everything you know.

We have temporarily suspended your account; you may return after 7 days.

Okay, so you think I'm being rude. Any examples? Nope. Any warning e-mail? Nope. Oh! Well how about a response to my messages? Nope.

This is downright insane. I just don't understand this kind of logic.

NOTE: I am not a moderator on ELU, but I do moderate on another Stack Exchange site.

Your question about harshness might be better asked on the overall Stack Exchange meta site.

Seven days might seem overly harsh, but it's actually the recommend suspension length for first-time offenders.

As for the reason you got suspended, that's one of the standard template reasons for suspension: 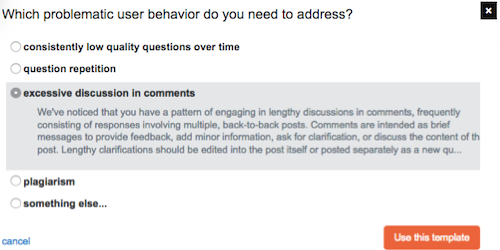 So it looks to me like the moderation team noticed you were being too chatty in comments, picked that reason from the menu, picked the default suspension length, and sent you the boilerplate text.

Whether or not 7 days is reasonable or "insane" recommendation for first-time offenders could be put up for debate, but, considering these are network-wide (not site-specific) menus, that's more of an SE issue than an ELU issue.

Are you alone? I don't think so. The few times I've had to suspend users, I've often overridden the 7-day recommendation with a 2- or a 3-day suspension for first-timers instead. But I wouldn't begrudge or chastise a moderator who merely followed the prompts.

As for those seven minutes that you felt were wasted, I probably wouldn't have responded to your emails, either. Moderators often feel it's best to simply let a matter rest than engage in protracted or emotional debate. I only have a small pool of examples to draw from, but I'd guess that most replies back to a moderation team go unanswered. (This doesn't mean that they are left unread or ignored; they are simply left unanswered.)

Anytime the number of comments under a question or answer reaches a certain threshold, a flag is automatically generated for the moderation team. My guess is that this happened on multiple occasions, and, when the mod team went to investigate, they found a large number of comments from you. Eventually, someone decided it was time to get your attention, and simply followed the prompts.

At the end of this timed suspension period, your reputation will be recalculated, and your account will resume as normal. We don’t hold grudges. The point of all this is to address the behavior. If the behavior improves, you are welcome back.

I'd suggest that, when the suspension ends, you leave fewer comments on the main site and frequent the chat rooms more.

The length of suspension is determined by guidelines, as J.R. kindly elaborated on in his answer. We sometimes make suspensions longer than the initial 7 days, but did not feel that your case warranted a longer suspension. Suspensions shorter than 7 days are non-disciplinary (e.g., user suspects their account is hacked and needs time to regain control). Suspensions are progressive, although sometimes a user will have two 7-day suspensions for infractions of two different rules or because they had suspended accounts that were merged into one.

We do not issue a first-time suspension without a warning to the user, either via mod message or in comments, except in very rare cases where behavior is so egregious it must be immediately and swiftly ended.

Finally, with regards to your concerns about communication with the moderation team:

Long story short, we aren't changing the suspension guidelines locally, so if you want to suggest new guidance, you should post it on Meta.SE, not here.

A logical reason for fixing the second suspension period at 7 days would seem to be that any subsequent period of suspension is not expected to be shorter than the earlier period, which I suppose was 7 days. Again it was less harsh than it would appear because the second suspension could easily have been for a month according to the network pattern.

I myself came perilously close to suspension a month back (I now realise, from your case) for excessive discussion in comments, but got a series of fair warnings in comments from moderators and managed to restrict the activity before I ran into any sanctions. Thus I 'lost myself' the habit of engaging in discussion in comments, though I still feel that comments section rather than chat is the more useful place for multiple-member on-topic discussion pertinent to a specific question or answer (while chat is certainly more appropriate for a more general discussion.)

So why did I give up extended discussion in comments? Because I got a hunch that continuing in this vein would get me suspended, which is the last thing I want to happen. Also, I got sick and tired of arguing contentious points and trying so hard to convince people who have well-defined ideas about English language and usage.

The thing is that Stack Exchange is scrupulously fair and liberal -- even an apparent punishment such as a suspension is only meant to 'guide' us to conform to the rules, which are the same for everyone. And let's face it: it's not my site or your site, but an online community with established rules of engagement and codified expectations of behavior -- in fact we new members are 'guests' here and need to follow the 'house rules', although by spending a few years here and accumulating a few thousand more reputation points, we could graduate to the role of 'hosts' (senior members and moderators.)

Meanwhile, we need to 'play by the rules' in order to contribute anything here and also derive any benefit from the interaction.

15
What should I do, I receive a targeted DEATH comment?

3
User suspended because her English is not fluent. That was a bit mean
3
Can't figure out how to apply tags on Main