A question I recently asked, What, was the 'joy' of a hard bargain? has apparently been flagged as offensive by reason of being "political commentary". I conclude that on the basis of (a) an edit I rejected yesterday, soon after the question appeared, in which a fundamental example of a social norm was bowdlerized, quite at odds with the intent of the post, by a rewrite of the paragraph presented below, and (b) the recent request from a moderator that I 'delete the political commentary (in the "art of the deal" paragraph)'. The objection appears to be to this paragraph, wherein I example the ambivalent attitude toward the Yankee trader in present-day US:

That ambivalent attitude continues to this day, and is presently represented by the tacit public approval of prominent public figures in the US, whose chief claim to prominence rests on their having successfully cheated many elderly or otherwise vulnerable people through the enterprising practice of what is fondly if falsely proclaimed as the "art of the deal".

That the paragraph should be interpreted as political commentary is arbitrary; it is clearly a comment on prevailing social norms involved in unraveling the entirely linguistic question of my post.

As evidence of the arbitrary nature of the partisan interpretation of my question, wherein it becomes political commentary rather than a representation of a widely accepted view of a particular social norm, I'll point out that the phrase "the art of the deal" appears in the Hathi Trust corpus 2968 times. For a prominent example dovetailing quite nicely with my use of it, there is this from the 1994 Harpers: 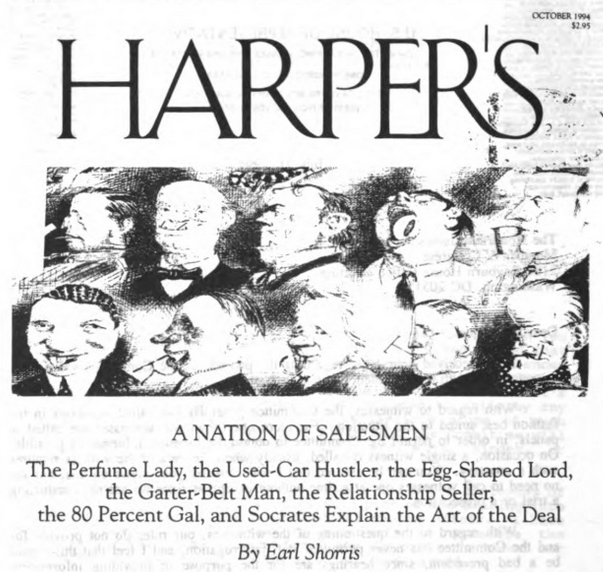 Even Socrates gets in on the act, although he was probably not a Yankee, except perhaps in spirit.

The list presented on the Harper's cover might, in the 1980's for example, have included PC salesmen (e.g., Bill Gates), etc. There's nothing necessarily political about the paragraph, other than the possible interpretations involving politicians who might be implicated.

My question is, should the sort of tangential and peripheral interpretations represented by the objection to this question prompt (a) edits at odds with the intent of the post, and (b) moderator response to flags based on those arbitrary and entirely unavoidable interpretations?

I don't think the sort of tangential partisan bickering represented by objections to my paragraph as "political commentary" should either affect what I include in a question, or prompt moderator requests for rewrites. The latter are nothing more or less than subscription to one particular political viewpoint over another, equally valid viewpoint.

This can be marked as resolved as far as I'm concerned. It's evident that the position of the moderation team has calcified in favor of supporting and condoning politically-motivated bullying. I'll not comply with the bullying. The stakes are too trivial for me to even consider compliance.

Your example reinforces the fact that “art of the deal” = “Trump”, which was unfortunately the opposite of your intention in citing it. The subtitle of the Earl Shorris article refers directly to Donald Trump’s book, The Art of the Deal. Shorris quotes Trump’s book multiple times in his Harper’s series. Trump’s book had already been a bestseller for seven years, and the phrase had already become tied to Trump in the public mind.

tacit public approval of prominent public figures in the US, whose chief claim to prominence rests on their having successfully cheated many elderly or otherwise vulnerable people through the enterprising practice of what is fondly if falsely proclaimed as the "art of the deal"

you will be understood, regardless of your intention, to be saying

tacit public approval of Donald Trump, whose chief claim to prominence rests on his having successfully cheated many elderly or otherwise vulnerable people through the enterprising practice of what is fondly if falsely proclaimed as the "art of the deal"

You would have had to be writing prior to 1987 for it to be otherwise. In short, this paragraph is, as you put it, a partisan tangent, and needs to go.

This is a perfect example of a provocative question, and what's more the author has not provided a single piece of evidence (so far) to support his thesis, i.e that the New York Times does not capitalize the p in President (Donald) Trump.

US "president" vs US "President" is there a change in what is grammatically correct?

Is this their use of poetic license to show their dissatisfaction with President Trump? Or is it a more subtle point?

I call the above a clear political statement.

Now, should references to Donald Trump be removed in all future posts? Do we begin to censor posts that clearly have a bias nature? Should we expect moderators to intervene and place on hold (IOW close) posts because they disagree with the politics sustained by the author? Or because they are afraid that users will begin bickering and hurl insults among themselves?

The question is closed as a duplicate. And it is. But if there hadn't been an earlier question, what would have been the policy of the mod team in general?

1
[acceptability] versus [usage] — does either matter?
2
Can I check with community with my interpretation when I am not sure about my interpretation?
0
Why does “good grammar” matter?
15
Moderators’ policy on hectoring
9
Moderators' policy on zinging
1
Questions asking for interpretation
5
Should the tag interpretation be deleted?
6
Puzzled: Is calling a mixed-race person a mongrel really a matter of opinion?