Is there any way for site participants to disable the "Can I help?" duck icon from the bottom right-hand corner of the screen on EL&U pages? Making the icon available as an option and giving users the ability toggle it off until they want to toggle it back on again would be fine with me, but I would rather not have it setting up shop as a permanent, inescapable resident on my screen.

Maybe we could make removing it a privilege accorded to site participants who have reached, say, 1,000 rep points and so are not likely to be in dire or constant need of anatidaean assistance.

The option to say goodbye to the duck is on the last screen, so you do have to make use of it in order to get there. Click "I hate this duck". 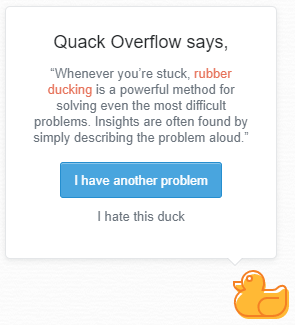 The Bathtub Duck is more dangerous than the Paper Clip! Sure, if you are a klutz, drunk, or a small child you can injure yourself with the paper clip particularly if you fool with it around your eye, but bacterial horrors abound in the Bathtub Duck.

From Scientists conclude your rubber bath ducky is probably gross as hell:

That’s the conclusion of a recent study by a research team from the Swiss Federal Institute of Aquatic Science and Technology, ETH Zurich, and the University of Illinois published this week in the journal N.P.J. Biofilms and Microbiomes, per the New York Times. The researchers wrote they collected “19 real bath toys (e.g., rubber ducks) from five different Swiss households” and then compared them to a control group, eventually concluding that the real bath toys had up to 75 million bacterial cells per square centimeter of interior surface.

According to the Times, Furtwangen University in Germany microbiologist Markus Egert told them, “That’s the same density of bacteria you can find in human stool samples. There are probably no other places on earth with such high bacterial densities.”

Toilet seats are pristine in comparison. Read the entire article if you want to be grossed out.

What does this mean for ELU? Damned if I know.

1
Notification of more than one person in a comment
1
Can we nudge the OP's to tighten up the question in the title?
13
Could the meta site be more clearly labeled?
4
Add links to "More!" items on .../privileges/moderator-tools page?
1
Annoying tag description popup
4
Single-word requests. The annoying and constant problem of inexactitude