Can somebody please stop the harassing commenters!

They are really a plague on ELU.

This question has been downvoted and criticized for “no reason to be” by one of the usual harassing commenters.

Why do we have to waste time and energy with such guys?

Can anyone do anything about it?

I share your exasperation. By any reasonable standard, the question you use as an example qualifies as an acceptable one at English Language & Usage. It is annoying to post a carefully researched, painstakingly written question or answer only to have it marred by the equivalent of a negative Yelp review—particularly one that the critic seems to have spent a minute or less formulating.

I would like to see the "It's no longer needed" comment removal option expanded to read "It's unsupported, unhelpful, or no longer needed." The expanded removal reason would make it easier for question and answer posters to request that negative, unhelpful, minimum-effort POB remarks not remain attached to their efforts in perpetuity.

Such a change might encourage critical readers to leave higher-quality, more carefully considered comments, to the advantage of the question and answer posters—who, according to Stack Exchange theory, are supposed to be the main beneficiaries of those comments. It might also make the tone of the site seem less unfriendly to site visitors, by lowering the level of visible negativity. It might even encourage some commenters to compose their own formal answers instead of simply caviling about other people's. But failing all that, it would at least make it easier to remove unwelcome barnacles from the hulls of legitimate questions and answers.

Yes: you can do something about it. The community is supposed to be self-policing, and flags allow you to do that. If other people agree with you and also flag comments, then the comment will be deleted, and if that happens too often to one user's comments then moderators are informed automatically too.

to get the new, enormous, comment flag dialog. (The number of flags available to you may be less than 100.) 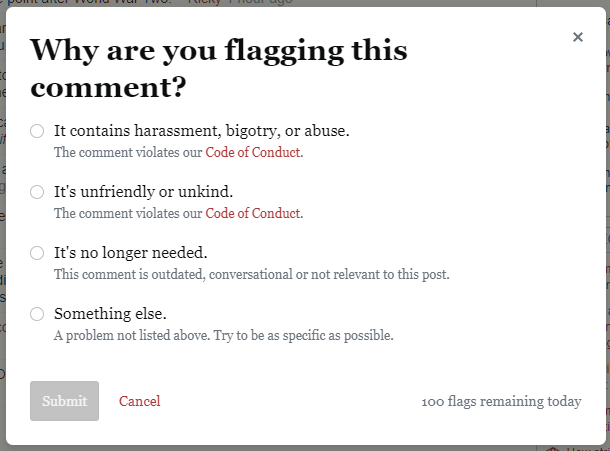 However, a word of advice: I don't see anyone else's comments on that question as needing flagging for being unfriendly. Disputing the premise of a question is not intrinsically unfriendly (although it should really go in an answer). Asking whether someone really lives on this planet probably is unfriendly.

Not the answer you're looking for? Browse other questions tagged support comments .

16
What to do against downvote troll?
1
Reopen closed question: 'Is “Why Steven Sinofsky is out at Microsoft” correct?'
12
Why was this comment deleted?
1
Can we prevent this question from being deleted, please?
10
About EL&U usage, purpose, and comments
6
Where possible harrasment is at play is it possible to identify all past comments from a user
5
Comments were moved to chat room, chat room was removed?