Serial down-voting after I asked a question [duplicate]

I asked a question that has been viewed only 4 times so far. But shortly after I've asked it, someone down-voted every post I've made on this site. 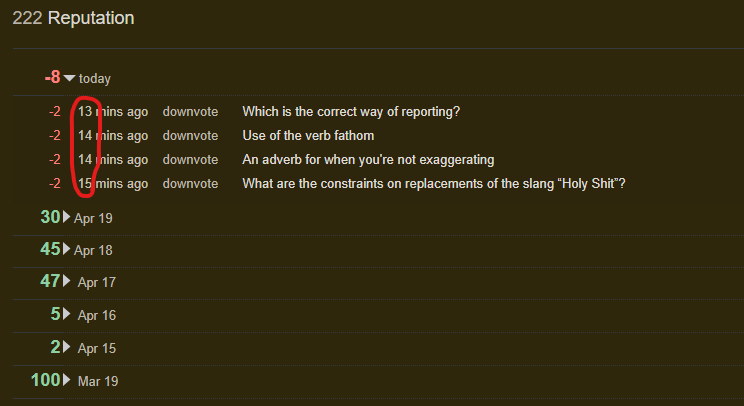 I know it's not much of a change in reputation, but it just doesn't feel good when you ask a question, your other posts get down-voted as well.

Is there anything I can do about it? Isn't there any way to prevent these serial down-votings from happening?

It's not a given that the Stack Exchange script would notice this behaviour as being suspicious-looking. In my experience, the system kicks into play when five or more posts have been downvoted in rapid succession, sometimes as many as four posts by the same user can be downvoted within a single minute. In this instance, it appears that the downvoter at least read the posts. As the OP's posts are not that particularly long, they won't need more than a minute to read at most.

I'm going to guess that the downvotes will probably stick. That's not to say I agree with the downvotes, but it could be that a user probably took offence to the OP's newest post and the type of language used. The phrases "holy fuck" and "holy shit", despite being commonly heard in everyday speech, still carry a taint of blasphemy. It seems probable that a user was offended by that language and wanted to express their disapproval more emphatically. There have been instances where posts on EL&U and ELL were flagged for being offensive and non-inclusive because they talked about "Down syndrome kids", "least gay", "masturbation" and "tits and boobs".

Like anywhere else in the world, EL&U has its share of straitlaced people but does that mean those four downvotes are inexcusable? Maybe if you disagree with its premise, but we don't know for certain the motivation behind the downvotes, unless the downvoter would care to explain.

Ah, and I'll add one final point, if downvoting questions were not free (because they are) perhaps the user would have paused a fraction longer or be dissuaded from hitting that down arrow.

Not the answer you're looking for? Browse other questions tagged discussion down-votes .

46
Is the EL&U community overzealous about closing/down-voting questions?
16
What to do against downvote troll?
12
Why is my question receiving down votes?
48
How to guarantee getting downvotes without explanation
1
Rep caps vs. downvotes, and the downvotes have it
5
Is the EL&U community generally more receptive to idiom-requests that seek English equivalents for foreign phrases?
6
Is there a better alternative to using low-vote answers for discussion?