Is this type of spammy Q&A permitted here?

This question (now deleted) about the difference between the terms legalization and attestation was posted yesterday. It was posted simultaneously with a self-answer. I thought it was spam immediately, but in a comment was told that self-answers are encouraged. 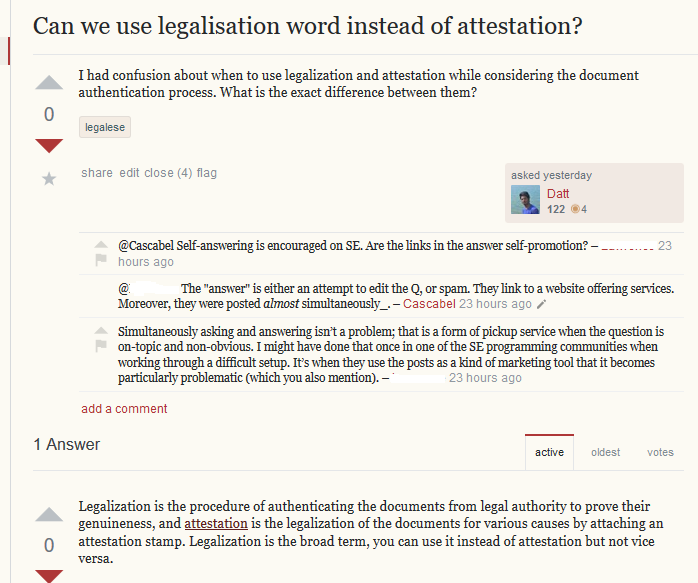 The "answer" provided by the OP was linked to the PEC website as a definition and "proof" of usage.

I decided to do a little digging, and this is what I found:

The OP is the technical director for BTW Group.

In other words, it is tricky, but it looks like spam.

In this case, the links contain more than just a link:

utm_source: As the name suggests this custom variable allows marketers to track the source that is sending the visits. If you have partnered with a website then you can track visits from the website using ?utm_source=...

Given that the links appear to be part of a campaign to drive traffic to their website, and the author does not disclose his affiliation with that site, I'm content that whatever the actual worth of the answer, it fits Stack Exchange's definition of spam. I've dealt with it accordingly.

At the risk of muddying the waters with (more) facts, the user in question:

Of course I cannot see deleted posts, and I have no idea whether he has any history of violating rules or causing trouble.

Is this a malicious, deliberate rule-breaker / spammer?  Or is it a person who has a lot of plates in the air, and forgot the rules of a site he uses only a few times per year?

Even if that’s true, does it change anything?  Past good behavior doesn’t mean you get to break the rules and engage in self-promotion without being transparent about it.  Sudden “spammy” activity after a long period of inactivity may indicate the account has been compromised, although I don’t think this is the case here.

I believe that it makes a difference.  I believe that it’s appropriate to look at intent and patterns of behavior.  A lot of the spam that we see is the first post from accounts that are less than a week old.  When Datt joined Stack Exchange, I doubt that that he rubbed his hands together and said “Now all I have to do is wait seven years, and then I can post a link to a company that’s owned by the company I work for, and maybe I’ll get away with it.”  If (and I say If, because I don’t know) it’s a first offense from a user with a long, clean record, it might be appropriate to delete the answer (or edit out the link?) and give him a warning.  Wiping out all his rep on EL&U seems excessive.  Banning the user (which hasn’t happened [yet] but was suggested) seems like it would be very excessive.

At one point the “Be Nice” policy said “Be welcoming, be patient, and assume good intentions.”  The language may have changed, but this still seems to be the spirit of the policy.

And, if the account has been compromised, how does it make sense to punish the legitimate owner of the account?

5
Is this the type of single-word request question we should be closing?
1
Generic vs. Specific 'This' & 'That' type Questions
17
Hold-Reason Suggestion: "More Research Desired" (MRD)
1
Should we migrate this game terminology question here?
5
What should be done with "Another" vs "other"?
8
Follow up to AI to detect ELL migratable questions