There used to be another option: Low Quality 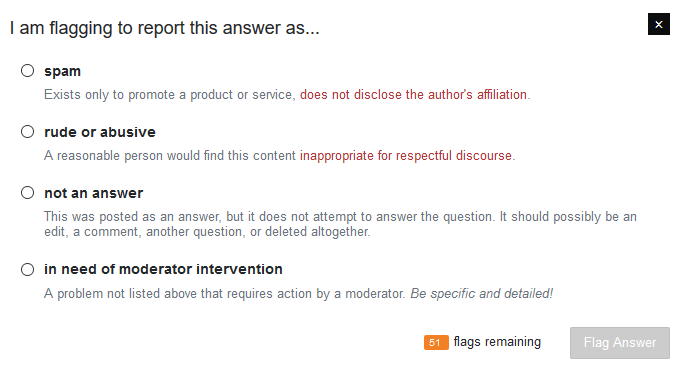 Where did it go? Is it only me? Or am I confused? It happens.

You can only flag as very low quality on new posts, I think the limit is one week old.

Give this Meta.SE post an upvote if you think older posts should still allow VLQ flags.

Jeff Atwood's answer to Is the Very Low Quality Flag Too Ambiguous more or less explains why this happens.

In summary, very low quality flags can only be applied to posts that are less than a week old and have a score of zero or less because it was found to be too confusing and often misused. It is meant to be used on posts which utterly lack usefulness and are beyond any potential salvage.

It needs to be noted that flagging is marking a post for outright deletion, and there are a limited number of reasons to delete questions and answers. This is perhaps because utility in the Stack Exchange system is of a broad concept. Bad answers have theoretical utility in being sorted from best to worst, and can hypothetically be improved through editing and commentary.

If the post is not literally incomprehensible, then the odds are that you are not supposed to be flagging it for that reason, so it is hidden away to prevent people who mistakenly think otherwise from doing so. See how S.E. staffmember Tim Post explains how the flags are meant to be used, most relevantly including this line:

If a moderator investigates a very low quality flag and sees an answer that is readable and seemingly relevant to the question, well. there's not much evidence of a quality issue. If we can see why someone might think the post was problematic, we generally mark the flag as helpful (after editing or removing the post).

Even posts that we may personally deem to be very low quality, such as unreferenced single line answers, do not meet the definition of unreadable, and should have other remedial action taken. It should probably be renamed to unintelligable, or something similar, because the present name is somewhat fallicious as a result.

These metrics are probably chosen in part because an unreadable post would almost certainly net a negative score and be deleted right away.

It also needs to be noted that trusted users only have the ability to act on a post that has a net negative score, so at the point a post has a net positive score, only a formal moderator can actually delete it. Consequently, a very low quality post, might qualify for a moderator intervention flag in the rare event that you see a post that actually qualifies as Very Low Quality flag that has that option unavailable.

However, you should keep in mind that moderators are under instruction to interpret the flagging reasons strictly to maintain each flag's communicative effect, so your flag might be declined even if you chose the wrong reason on a delible post, it can still be declined which can count towards an automatic flagging ban, even if that post is deleted, so be sure that the flagging reason applies.

Not the answer you're looking for? Browse other questions tagged discussion flagging low-quality-posts .

3
Is it appropriate to flag duplicate questions?
3
How does one actually disagree when reviewing an item?
2
What's your opinion on not having the “VLQ” flag nowadays?
4
Questions about Very Low Quality flags
8
What defines a low-quality question on EL&U?
12
How (and whether) to flag a post with an irrelevant picture
16
What's the average score for questions in 2019?