Is there any way of knowing who is serial down-voting me?

It requires a certain amount of venom and dedication to go through another user's list of questions and answers and then methodically DV as many as they can find. I am not sure of the consequences for the DVer, and I would like to know what site policy is regarding these (ab)users.

In the latest violation of this site policy, someone got pissed off enough to DV at least 28 of my posts. They were of course reversed the next day without my even being aware of it... 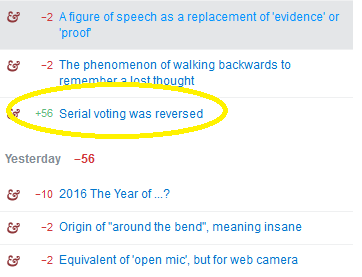 Maybe I pissed someone off enough that they felt this passive-aggressive attack was cute. Instead, it created more work for the site.

If I have angered some other user so much that they felt that this was their best recourse, I am saying that I would like to iron this out in a better way.

Failing the honest taking of the proffered olive branch, I would like to know who it was so that we can talk about it in a reasonable manner without violating site policy.

Is there some way I can discover who is mounting this attack on me?

No. Voting is private, although details are logged in the database. Access to the details of that data is restricted to staff. Even if you undertake your own detective work and try to see if your rep changes are matched by rep changes on another user [since downvotes on answers cost you 2 points and the voter 1 point], that's a lot of work and is unreliable — because the system is designed to make it very difficult. Don't do that.

As you can see, the system has various built-in safeguards which can trap this targeting and reverse it. (Targeted voting is aimed at a user rather than what they post. It can be downvoting as here, presumably in revenge for something; or upvotes as a favour. Both directions can be caught and corrected by the system.)

Moderators have access to very limited information, and cannot correct anything. However, if the system doesn't deal with it (as it has here), then we are able to nudge it upstairs for staff to deal with.

Targeted voting isn't allowed, and if it does become obvious then users who do that will receive a message and can be suspended. Please don't take matters into your own hands: let the system deal with it, and if it continues and isn't corrected after a couple of days, let moderators know so they can take an initial look. You can do that in chat, or by raising a flag on one of the posts which has suffered.

In this case, the system has done exactly what it's designed to do and undone any harm.

Further information is on MSE, since it's a network-wide phenomenon (and handled identically by the system on every site):

Others have responded to the core of your question, i.e. (how) can you find out who is serially downvoting you. I thought a slightly broader perspective might also be useful.

It's worth noting that SE uses algorithms to detect suspicious voting activity, which doesn't just include serial downvoting, but also serial upvoting. The underlying principle is that posts should receive votes based on their usefulness (or lack thereof) rather than on the identity of the poster. Serial voting of any kind is not only unfair, it undermines the integrity of the site.

Some serial voting can be somewhat innocent, committed in ignorance of the algorithm and lacking insight into how their activity is unfair. For instance, an inexperienced user might like another user's post, and upvotes it; they click on the username to read their profile, and they discover that the profile page lists other posts by that user. They click on some of these posts, like what they read, and upvote these posts too. It's an innocent act, and if it's only a couple of posts voted on then it's harmless enough. But if they upvote (say) a dozen posts by that user, this is giving that user an unfair boost in votes; thankfully, the algorithm is likely to identify this as serial voting and will automatically reverse the votes.

Of course it can also happen somewhat innocently with downvotes. For example, I might notice that a particular user has been posting ignorant, misinformed and incorrect answers. "Who IS this obnoxious person?" I ask; I look up their profile, and look through their recent posts, which only confirms my view about them, as I DV more of their answers. The point is that even if I'm assessing each of their posts on its merits, the fact that I'm selecting just their posts for review means I'm serially voting, and if the combination of the pattern of my voting and the number of votes cast meets the algorithm's parameters, it will automatically reverse those votes.

It's also worth noting that the system does NOT alert the mods when it identifies suspicious voting behaviour and reverses a user's votes. I know this because two years ago I became concerned about a particular user whose poor (and in some cases, glaringly ignorant) answers were consistently receiving many times the number of votes that my own awesome answers were getting, and when I looked at their posting timeline in their profile I could see not only that there was an obvious pattern to the significant upvotes they were receiving (which regularly exceeded 100 rep points a day), but there had been several very large voting reversals in the last six months. I could also see that there were several occasions where serial voting was clearly occurring but wasn't enough to have triggered a system response.

I don't know whether the user had created fake accounts, or was using the keys to the legit accounts of other household members, but the upvoting was too concentrated to have been from a more innocent cause such as in response to them tweeting their answer. They were clearly cheating. But looking at the size of some of the reversals - 500 rep points or more! - I was amazed that the user hadn't been suspended. I learnt that I had to flag one of the user's posts and alert the mods to my concerns. I'm pleased to say that when the activity continued, the user ended up being suspended for a year.

The point is that (a) mods aren't alerted when the system picks up serial voting and reverses the votes, (b) the system doesn't pick up "less egregious" serial voting, (c) mods can and will take action if you alert them to obvious serial voting (although if you can't identify the user, their only recourse is to refer it "upstairs" to staff), and (d) if a user knows about the system algorithm and genuinely wants to target you, it's not too hard for them to structure their serial downvoting (or, indeed, upvoting) so that it flies below the system's radar and cannot be detected.

Apart from flagging your concerns to the mods, the best defence against serial voting is for all of us to vote vote vote. If all useful posts are receiving plenty of upvotes, then on any individual post a single DV from an antagonist will be lost in the wash.

Yes. If someone is serial downvoting it means they should see a rise in their points. Now I believe there is a systemic way SE handles a habitual serial voter - whether up or down - that does not revert point back to the serial voter. So this may not work for someone serious about their serialness.

Now the person that does not get their points given back should in theory face some sort of suspension so you could scan the active user list to see if anyone got suspended - it could be just on the SE site in question. These methods aren't foolproof and have to be done quickly but gives you a decent chance to figure it out.

29
What's with all the serial down-voting on the “boobs” question?
45
Is the EL&U community overzealous about closing/down-voting questions?
3
Is http://www.tinyguru.com violating EL&U (or YOUR) copyright?
18
Who is this spammer and is this really spam?
2
Why is this question with a eyecatching title off topic here?
0
About controversial questions
3
Should specific mods answer for their actions when called to task in meta?
5
Does cited material merit special consideration when the content is potentially offensive or unwelcoming?
3
Serial voting reversal