Should this question about the meaning of "a friend to all is a friend to none" be reopened?

The question "A friend to all is a friend to none" - Aristotle. What does this exactly mean? was closed five years ago, roughly a week after it was posted. The argument in favor of closing it (to judge from several people who posted comments beneath the question) seems to have been that the poster should have asked it on the Philosophy Stack Exchange site because Aristotle.

But the question is about what the expression (which is proverbial in English as well as in other languages) means as used by English speakers—not specifically what Aristotle meant when he said something similar 2300 years ago. Arguing that asking about the meaning of "a friend to all is a friend to none" in English is off-topic at EL&U because it may have originated in ancient Greece and may have philosophical overtones is like arguing that asking about the meaning of "sour grapes" in English is off-topic here for the same reasons.

I recognize that some close voters may have seen the question as inviting opinion-based answers, but that is arguably a danger of any "meaning" question—and we have lots of open ones on this site. As long as a question boils down to "What do people generally mean when they use [a particular idiom, proverb, or other phrase in widespread use in English]," I think it is properly on-topic at this site.

Most strikingly, although the question was open on EL&U for only a very brief time, it has drawn more than 49,000 page views over the ensuing five years. Either a lot of philosophy majors have wandered onto the wrong Stack Exchange site by mistake or there is a lot of interest in the posted question as one of English language and usage. I think the latter explanation is the likelier one, and I think the question should be reopened. What do you think?

Let me start by saying: Your meta appeals have historically and consistently identified mishandled posts and invited the correct call to action; and where I’ve seen them and could take those actions, I have (so far as I remember for all of this).

On the topicality of the question

But I can’t see my way towards this particular appeal; the linked question is asking about a concept, and is more or less divorced from English.

As you say, the original proverb was Greek, and has been inherited by English and many other languages. This tells us the host language is more or less irrelevant to answering the question.

Your (characteristically) scholarly, meticulous, and detailed answer there attempts to make the question about English by tracing its etymology into our language, but I note that by doing so it answers a question which wasn’t asked. I'll further note that the answer he is seeking is embedded in the quotes you marshal in your recitation of that history, not the timeline you have organized it along, and those are related to English only in that that's the language they are written in. They'd shine an equal light on this topic if they were written in any other language.

That is: the answer OP needs is that loyalty must be selective by definition. And that answer is unrelated to English.

I adduce to this case the fact that that all the other answers interpret the question this way and provide this conceptual guidance, the same as the authors of the quotes you cite in your own answer. And excepting that very answer with its etymological bent, no one else touched on English qua a language in their responses.

Finally, to your point on pageviews: I think that’s a red herring.

Those views are undoubtedly coming from people searching the term itself (likely bare and without reference to “English” in any way) using Google, and that reliable servant dutifully offering up that page as being rich in hits for the phrase, which just happens, through an accident of history, to have been posted here.

The searchers who click that link, and read the question and answers, don’t know about EL&U and very likely don’t care about the platform it was posted on. The pageviews would be the same if it had been posted on Reddit or Quora or Philosophy.se.

I am quite doubtful that the readers started their journey here by encountering the phrase, being confused by it, having the thought "there must be some trouble with my understanding of English; I should consult a site about English", finding and coming to EL&U, and finally using our search bar to search that phrase. No, that's a bridge too far.

This is what they're doing¹: 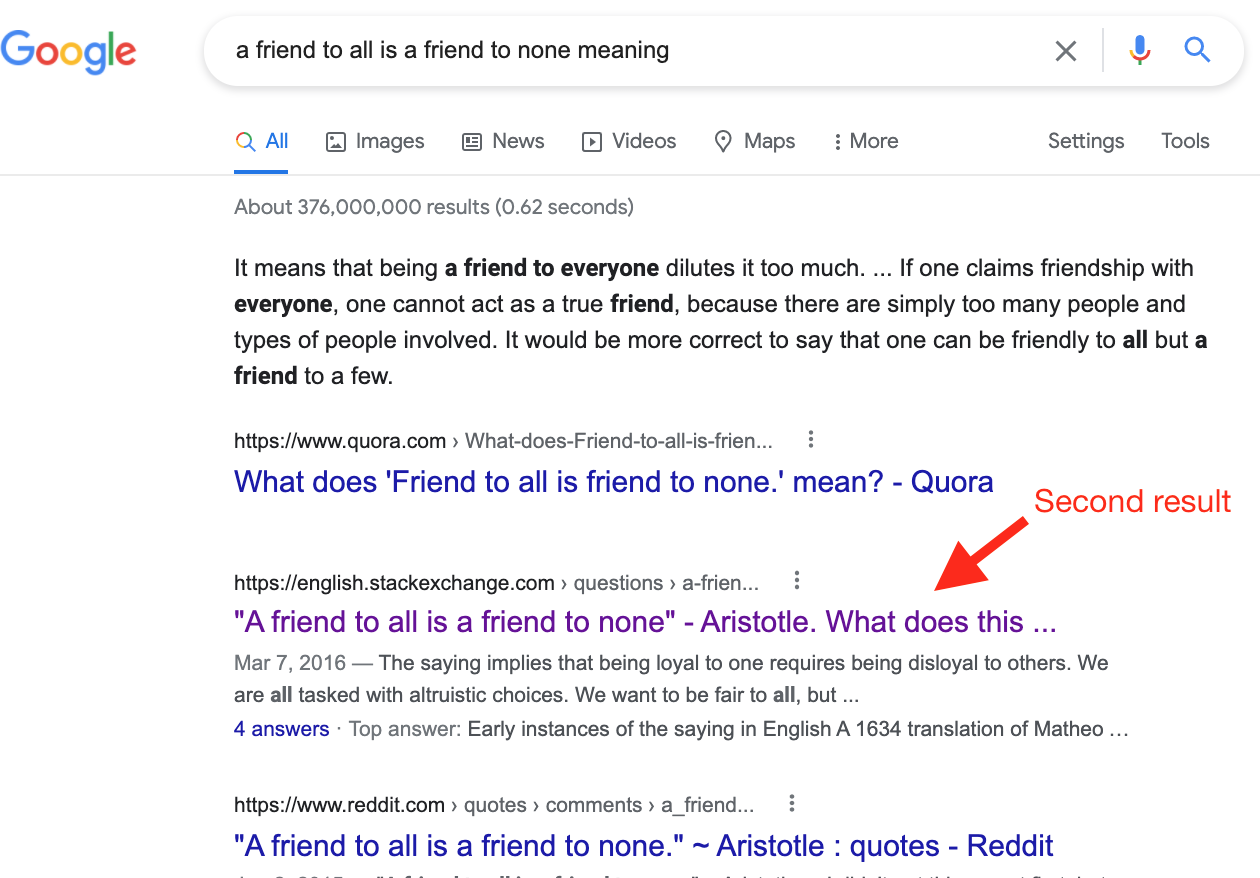 In sum, I really don’t think this is a question about English².

¹ Worth noting that I visited the other results from this search, and the platforms they're discussed on universally categorize them as under "quotes" (e.g. r/quotes) or "phrases" or in various quote compendia; none categorize it under English in any cognizable fashion.

² To be as fair in this analysis as possible to the question and its OP, he does explicitly ask Is "being friendly" and "being a friend" being differentiated here?, which is a question of English and does constrain his context to the quote. So if we must debate the topicality of this question, I would focus our efforts on determining if that sub-question serves as a sufficient saving grace.

The reason why the question is off topic is not 'because Aristotle', but because what the questioner is curious about is the subject matter of the sentence, rather than the English words and grammatical constructions used in formulating it.

A question about anything can always be formulated as a question about English, but that doesn't mean that it is within the scope of this site. Suppose that someone posts:

Can somebody explain to me what the word electricity means? I have looked it up in a dictionary, and it says that it has something to do with charged particles of some kind, but I don't understand what that means.

Such a question would be promptly closed as off-topic, and rightly so. Even though the question is, on the surface, about the meaning of an English word, it would be obvious that what the questioner needs is a lesson in physics, not a scholarly account of how the word entered the language. The question about friendship is like that: what the questioner needs is a substantive discussion about friendship, not a scholarly account of the history of this particular form of expressing the idea in English.

Therefore, if such a question had just been posted, I would wholeheartedly agree that it ought to be closed. With the current three-vote threshold, chances are that it would be closed before anybody posted an answer to it, and that it would be deleted soon after that.

But, I do not think that it is irrelevant that this question received several answers and that it has been viewed thousands of times. Mr. Bron is probably right that most of those who viewed the page came to it from a general-purpose search engine, and that they are not the language enthusiasts of the kind that the regular contributors to this site are. But this doesn’t mean that their visits should be disparaged. Chances are that at least some of these people have learnt something from that page, and one of the purposes of this site is precisely to help and educate such casual, one-time visitors; it doesn't exist solely for the benefit of a couple of hundreds of regular participants. Yes, the same question could have been posted on Reddit or Quora, but it is unlikely that it would have received there as interesting a response as was provided by Mr. Yargs on this site. While I understand the importance of keeping this site on topic (by closing off-topic questions before they are answered), I fear that excessive preoccupation with guarding its boundaries sometimes gets in the way of its benefiting the general public as much as it can. Closing old questions that have already received a lot of activity (or insisting that they remain closed) seems to me a manifestation of such unproductive preoccupation.

In other words, I share the attitude to such questions that was expressed in a comment by Mitch, but I thought that it deserves to be formulated in a full answer.

4
Should questions about resources be asked on main or meta?
15
Are all questions about the reason a word is spelled/pronounced the way it is duplicates of one another?
5
Should "Why can we use inadequate but not 'inspecific'?" be reopened?
0
Should the following question be moved to Meta?
1
Should this question about "this book is drenched" be closed?
0
Is the question asking about the "AmEng meaning" of two phrasal verbs a duplicate?
3
Should "What Does Mansplaining Mean?" be reopened or migrated? (Reopened)