Is there any website that assesses how rare or common are the words I used in my essay? Something like this picture below: 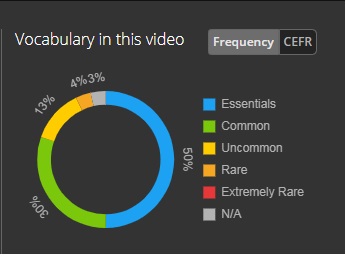 It assesses the frequency of English words in sentences: level one contains the 1,000 most common terms and their derivatives, level two the next 1,000 words and level three the 800 words most commonly used in higher education which are not found in levels one and two. Then there is something called “outside levels” which are words not in levels 1, 2 or 3.

For example, the term weaknesses is classified as outside level but words such as "would", "many", "for", "be", "and", "not" and "go" are classed as level one.

Simply add the text and click enter, the results will open in a new page.

Longman Vocabulary Checker allows you to choose the frequency level. I selected

●●○ mid frequency words – which indicates the next most important 3,000 words in the English language.

The text is from George Orwell's novel, Nineteen Eighty-four.

It was a bright cold day in April, and the clocks were striking thirteen. Winston Smith, his chin nuzzled into his breast in an effort to escape the vile wind, slipped quickly through the glass doors of Victory Mansions, though not quickly enough to prevent a swirl of gritty dust from entering along with him.

When I measured it against the Academic word list it failed to score a single hit.

However, the following scientific text scored quite highly

At subsequent passages, the virus grew rapidly. A conclusion was drawn that during these experiments either virus cross - contamination may have occurred, with RQ contaminating the RM stock, or that a variant virus emerged from the RM

There are dozens of similar tools online, it's a question of using the most relevant search terms. Mine were: checker, vocabulary, level, frequency, tool

Google NGrams could give you a hand. It gives you instances in written texts and that is good for an essay. It is not 100% reliable, but it can provide precious help.

Here you can find information on how to use the site.

Not the answer you're looking for? Browse other questions tagged discussion resources online-resources statistics .

6
Resources on larger common word lists
13
Where can I ask for free proofreading?
17
How does this website earn money?
11
Website to see frequency of use of words together
1
Is there a service to find out if my phrase is used online like corpora, but not exactly?
3
Resources for finding early uses of words?