Are Oxford Dictionaries available online now that Lexico is dead?

There was once a website oxforddictionaries.com that provided merged contents of ODE (Oxford Dictionary of English) and NOAD (New Oxford American Dictionary), along with some grammar tips etc.

Then it was rebranded as Lexico(.com) when Dictionary.com (organization) partnered with OUP (Oxford University Press).

Does it mean that there's now no way to access relevant Oxford (non-learner's (!)) dictionaries online? It seems to be quite ridiculous considering ODE & NOAD are both the official dictionaries in Apple OS-s and the base for Google (Translate) dictionaries :(

Where can I find traditional Oxford Dictionaries online? I'm not talking about learner's or OED. (Their mobile apps from Mobi Systems seem to be alive though...)

Yes, you can still access the definitions freely online, since apparently Google and Bing are still licensed to provide them. (Note: Some entries for proper nouns are missing or incomplete in Google, while Bing's were complete.)

For best results, search for define [term]. You can also search for dictionary and type your word in the box (autocomplete will show you what words are in the dictionary).

Here's what I see in Google compared with NOAD (they're the same, though I wasn't able to show the full NOAD entry which includes the origin): 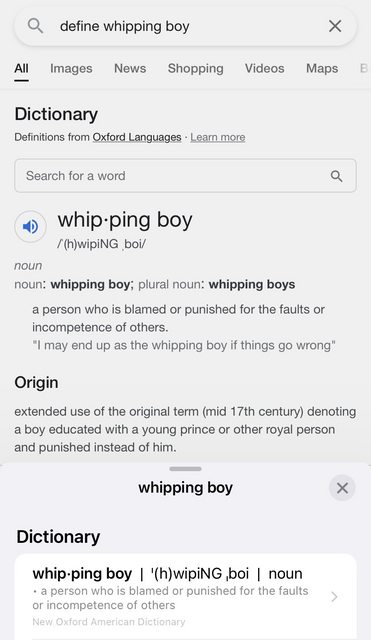 It's not entirely clear to me how this works, but I think it's identical to NOAD for most definitions. (For people who live elsewhere, it may use something based on ODE instead, the British counterpart to NOAD.) Unfortunately, Lexico had some definitions that were missing in NOAD/ODE, such as "fireman's pole".

For your convenience I made bookmarklets to switch between dictionaries, based off the information in Nardog's answer. To use, bookmark any page and replace the URL with one of the snippets below.

(Could probably use fine tuning.)

If you use a definition in your post, please credit the dictionary provider, which you can see at the top: "Definitions from Oxford Languages". For greatest clarity I recommend citing how you found the definition: "Oxford Languages via Google".

Lexico had more example sentences, and sadly I don't think they are available anywhere else. No other dictionary has examples quite like that. The closest alternative may be Cambridge, which seems to have about two examples per definition, plus a few more that belong to each group of definitions. However, while Lexico had "found" examples, Cambridge seems to have examples that were made up for the dictionary.

Operating systems that include Oxford Dictionaries

Some systems also come with Oxford Dictionaries installed. This is usually a more convenient way of accessing it. Here's a list:

As you noted, there are also mobile apps (iOS and Android). I may have used the Android one but I honestly don't remember much about it. The reviews seem to be very mixed.

Lastly, many of the pages (but not all) were backed up by archivers like archive.org. For the best chance to find an archive, it's important to remember all the renames the site went through:

To add to Laurel's answer, this URL scheme seems to be the way to make sure everybody who follows a link to a define search on Google sees the same thing:

Let's break it down one by one:

For Bing, which includes proper nouns unlike Google, these seem to work:

To add to other answers, apparently there's something called Oxford Dictionaries Premium (https://premium.oxforddictionaries.com/words/help, they apparently include many languages), which is only available with a subscription, but it probably (maybe?) still has Lexico's content...

Haven't tried it yet though

Of course, using Google or the like isn't a good alternative either because they exclusively use some US English version of their dictionary content with no option to change it, and it doesn't take context into account either. A quick search on Google for define football, for example, regardless of even being outside of the US, shows these as the only definitions:

Clearly, this is just egregious.

The closest thing I can recommend is to use Collins' website, but of course, that isn't Oxford content.

Now, you can access The Oxford English Dictionary online, like always, the unabridged version rather than the highly abridged version lexico.com offered, but it is a subscription website, meaning you have to pay for a subscription in order to access it and it doesn't serve as a good source for websites like this one because only users who have paid subscriptions to it will be able to link to the source material you use as a reference and see it, which will be very few users. Nevertheless, if you're interested, the web address for the official website of The Oxford English Dictionary is: www.oed.com.

2
Online resource which tracks new words that are evolved or discussed
1
New abbreviation for Oxford Dictionaries?
8
Are there any dictionaries for AAE?
9
Are "commonly available" reference dictionaries too simplistic to answer questions on this site?
14
RIP Oxford “living” Dictionaries
14
How should the new Lexico-hosted Oxford dictionary be cited?