Why does the drop-down menu show a reputation difference of 2 points?

In the past days, I noticed that the drop-down menu shows a reputation gain for the day that is different from what reported in the reputation page for that day.

For example, today the drop-down menu shows 13, while the reputation page shows 15. What's going on? 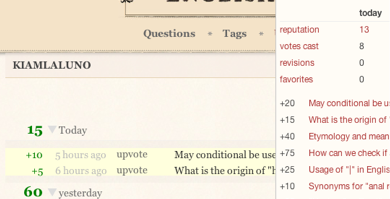 If then I look at english.stackexchange.com/reputation, I get the following data, for today, which confirm the reputation gain is 15 and not 13:

I know the reputation is not always correct, but I noticed the same behavior on different days.

There are two possible conclusions here, though it'd be difficult to determine either one. Both are the results of a -2 reputation loss that isn't tracked - one because it no longer exists, the other because it is a reversal.

In the first scenario, you got downvoted on a post today. That accounts for a -2 to your displayed reputation, and so your dropdown will report such. However, the source of the downvote may have been deleted. This thus means that your Reputation page won't show it (since it won't have a downvote to show), and your reputation audit will likewise not show it (because the downvote doesn't exist). However, your displayed reputation is still only 13 different, so the display name dropdown will claim a difference of 13 rather than the proper 15.

In the second scenario, you retracted an acceptance to an answer from a while ago. The think about retractions are that they don't cause an actual reputation loss, but instead they just clear the original event from your history. So the -2 is not shown as a -2 on any report, but rather as a lack of the original +2. This would explain why it won't show up on the Reputation page or the reputation audit as the loss is due to the lack of an event, not the presence of a loss. As with the previous scenario, your difference in reputation from today and yesterday remains 13, hence why the display name dropdown will claim such.

Regardless of the source, a reputation recalculation will fix the issue.