EDIT: It appears each click on the "start a bounty" link simply opens another bounty box. The position of the new box seems to depend entirely on where the page is scrolled when "start a bounty" is clicked. 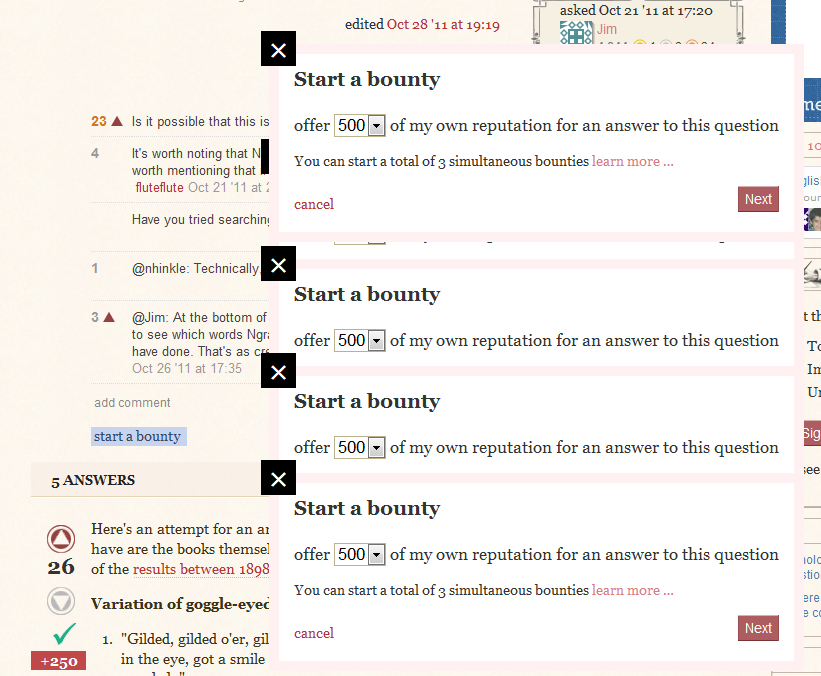 While viewing the full site from a mobile device (at least in the case of Android) trying to start a bounty is difficult. The popup appears offscreen, and several can be opened at once. Each successive page (reason, additional comment) opens further off the page, to the point where the user scrolls so far away the page's content is no longer visible.

Possibly related to this issue?

I can't repro this, it must have been fixed between the report and now.

Not the answer you're looking for? Browse other questions tagged bug status-completed design bounty mobile .

3
What happened to the bounty I placed on one of my questions?
0
Lost "start a bounty" button
2
Bounty minimum on other users' questions
1
Is bounty really guaranteeing more exposure?
10
In this scenario, who gets the bounty?
7
Did I miss the bounty deadline and if so, is there any way of manually awarding it?
5
Answer I was going to award the bounty to disappeared
6
How can a user with only one rep offer a bounty of one hundred?
4
Addressing the responsive EL&U site theme - moving forward