Battle of the sites - cancelled

In response to the community's feedback on this contest, we've decided to cancel it. We never intended to favor quantity over quality, but we can see how this contest missed the mark. We appreciate all the constructive criticism regarding this idea, and will be working to come up with other ways to promote activity on EL&U.

In case you haven't seen the original contest yet and are interested, you can still read the announcement below.

As more and more research-oriented sites pop up on Stack Exchange, we can’t help but be impressed with the amazing academic resource our users have created. We also can’t help but wonder... which academic community has the most Stack spirit? In an epic question-asking battle, would Math take down Statistics? Could Linguistics edge out English? If only there were a way to find out...

Oh wait! There is: an epic question-asking battle. Let’s do it! It’s getting close to the holidays after all, so now is a perfect time for us to say thank you by continuing our tradition of giving back. As such, the community that wins this battle will get 1000 USD to donate to a charity of their choice. Winners of each round will also get 100 USD to donate to charity.

Here’s how the battle will work:

Are you ready for this?! Here it is: 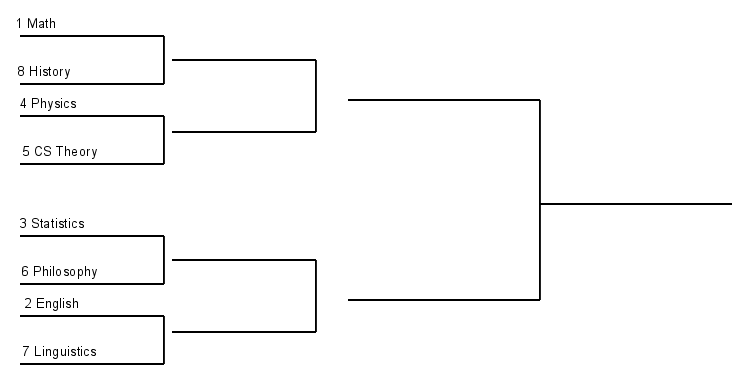 "Stack spirit"? Really? You do realize this trivializes the pursuit of knowledge, don't you? Also, it invites the sort of questions The Powers That Be have indicated are not welcome on this site. Cf. What did Charlie Sheen mean ..., What does ... stir the paint mean, and Etymology and meaning of "When does the narwhal bacon?" These are among the highest-viewed questions we have here.

Now, here we are, opting for quantity over quality — begging, as it were, for even more idiotic questions "in the spirit of charity." And doing it all absent any appreciation of the inherent irony. If there are already too many crap questions on this board (and there are, and TPTB have stated that there are), then such a campaign at the very least broadcasts a mixed message. But it's OK, because it's for "charity," right? And the charitable contribution is an underwhelming $1,000. If this were really all about charity, you might consider establishing a fund to which people could contribute real dollars. I believe you would get to the target amount (and more) a lot quicker. And to that I'll put my money where my mouth is: Undertake such an enterprise instead of this one and I will personally start off the donations with $100. That's a tenth of the way to the target goal right off the bat. Make that the contest and you will exceed the goal by far.

But charity isn't really what this is about, is it? This is about putting up numbers for SE, just as other enterprises sponsor charities to get good publicity. There is never any doubt about the purpose of those campaigns. I know, I've been in such meetings when "proceeds donated to charity" gimmicks have been considered in the mix with other marketing programs.

Smells like Teen Spirit to me. Cue Kurt Cobain: Hello, hello, hello, how low? and Oh, well, whatever, nevermind.

2
Messages to moderators required on moderated sites
4
Acquiescing to other Q&A sites
0
Grammaticality of user interface of stackexchange sites
87
This is not a site for "serious English language enthusiasts," and it never will be
20
Does ELU Have Worse Questions Than Other Sites?
14
What is the best way to answer a question which has no answer?
11
Coming soon: improvements to close-voting