Is downvoting questions multiple times meaningful (and if yes, when)?

Comparing stackoverflow and EL&U I have found that over at stackoverflow more questions remain at -1 compared to EL&U (answers are different).

The point is that for downvoting there is one reason - the question is bad. Usually a person will downvote and explain downvote and after that there is no reason for more people to downvote it.

The asker now has the option to improve the question.

Also, new users might not be able to delete their questions (?) and also get even more frustrated against improving.

Finally, if question is really bad, not improving, etc it should be further downvoted.

Let me just mention that this has nothing to do with closing, questions can be closed even without downvoting at all.

Although thinking about improving EL&U is the proper motivation for downvoting a question I think that downvoting more than once, actually, does not have that effect.

Here's a post that triggered the thinking for those interested. Also, this image compares the ratios of question scores: 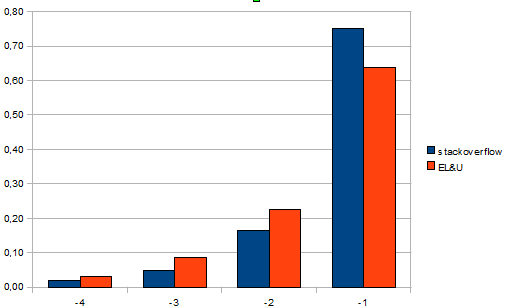 First, about the chart. So EL&U is voting down a bit more than Stack Overflow, but the difference isn't all that much. (I'd be interested to see some stats from other sites too, particularly Programmer.SE and other *&LU.)

A downvote is a kind of flag. If you see a downvoted question, you might want to check it to see if further action is needed (perhaps a vote to close or some helpful comments).

If I think a question "does not shown any research effort; it is unclear or not useful" then it can be downvoted. But I have control over a single vote only.

Others might upvote for whatever reason, whether correct or not. If my downvote takes it to -1, I don't know if two more people will upvote it to +1 and the negative vote "flag" is lost. (Remember the poster still gets a positive net rep for one upvote and a downvote, even if the votes balance out.)

Any spread of up and downvotes are also useful, it can show how controversial a post is.

All this is using the site's tools as a quick and handy way of communicating the relative value of posts. 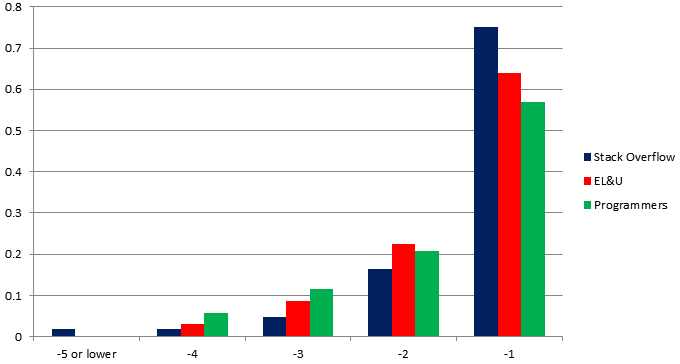 The point is that for downvoting there is one reason - the question is bad. Usually a person will downvote and explain downvote and after that there is no reason for more people to downvote it.

Well, no. A down vote is not just a signal to an asker that their question might need improvement.

The fitness of a question is a spectrum, otherwise there would never be a need for questions to have scores above one, either.

Close votes are an extension of this, because members of the community, who should have a better understanding of what works for this community, are able to be more definitive at clearing away the crud.

Obviously close votes have another use: duplicates. Otherwise they are just stronger down votes.

44
Is the EL&U community overzealous about closing/down-voting questions?
12
Problem with faq: EL&U audience - experts only or students too?
6
Should you also downvote when you vote to close?

6
Should you also downvote when you vote to close?
7
Deleting answers to closed questions
21
Is this a good justification for frequent downvoting and closing?
5
Why are there so many meta questions about how so many main questions are being downvoted or closed?
13
Why the lack of voting on questions at ELU?