In the Users page (either the quarter view or year view), when I hover over Barrie England's rep, the popup shows the amount twice (along with the total rep):

In the week, month, or all views, or for other users, the popup is calculated correctly:

Before you sigh in disbelief at my pettifogging, check out the voters tab or the editors tab, in any view except all. Every single user has their total reputation no less than three identical times on the popup, even where it says it's the rep for the month or week or whatever: 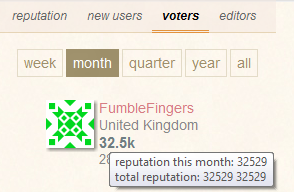 Sigh all you want.

Edit: Hovering over Barrie's rep in the quarter view of the rep user tab still brings up a buggy popup:

Further edit: And now that's about to be fixed too.

See the answer to Hover popup shows wrong/duplicate rep for week/month/etc in user profile page, the question I posted on MSO after I realized the bug was on every site:

Thanks, this will be fixed in the next build.

For those of you who don't understand the terminology used in the quoted answer, it means the bug will soon be squashed.

Not the answer you're looking for? Browse other questions tagged bug status-completed .