I suggest EL&U introduce a feature to allow questioners to request a question be reopened. This is especially helpful for users who have thoroughly edited a question after it has been closed.

I originally wrote this question about a specific writing project. It was closed for being "too localized." I've now spent a lot of work abstracting a general question from my original specific one, but I doubt any of the closers have looked at the edits. I would like to reopen the question, but I don't know of any mechanism to make sure it's re-evaluated. A general mechanism is likely to be helpful to many others.

(If you don't have enough points, you won't be able to vote either way, so the mechanism will be "invisible" to you.)

That said, even with the question reopened, I'm not sure how much more input you'll get. After reading your question, the first thing that popped into my head was "failure to adjust," and that answer has already been provided. Who knows? Maybe someone will think of something that'll knock our collective socks off, but I wouldn't expect a flurry of inspired responses.

One thing that has often surprised me is how some folks try very, very hard to get a question reopened, even when two or three very good answers have already been provided, along with some helpful comments as well. Closure is not necessarily an indictment on the asker; sometimes, there's simply not much more to say.

Here's a screen shot, showing what voters are presented with when voting to close. Some questions don't fit nicely into one of these five catagories, but that doesn't mean the question shouldn't be closed nonetheless. 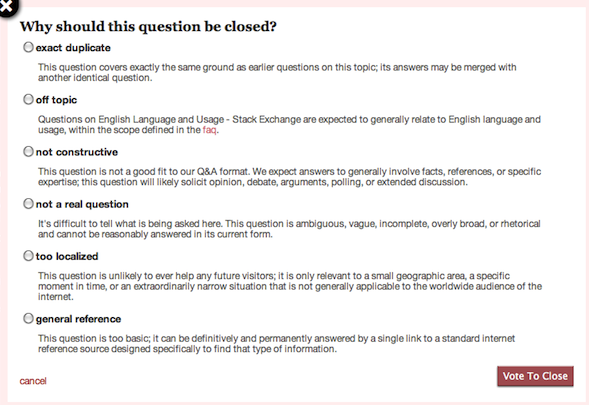