Valid question closed as 'too localised', requesting reasons for being out of scope

My question Indicating 'ephemeral questions' section in an FAQ was closed as too localized. Reading the FAQ, the very first example of valid questions is for 'word choice and usage' which applies in this case. There is no reason to believe that other people never put transient info in a FAQ format. As such, why was this closed?

I'm not sure why it was closed, but I noticed that the question remained open for nearly a fortnight after it was asked, so I don't think that it would have received much more attention than it already did.

As for the question itself, I think you did a really good job of framing your original question. (That doesn't always save a question from being closed, but I thought it was worth mentioning that you did a good job with it.)

As for being "too localized," sometimes the "I'm looking for a word that describes X" questions will get closed for that reason. (I don't want to debate whether or not that's always the right outcome, but I have observed that happening from time to time, particularly when there doesn't seem to be a good word to describe X.)

Remember, "too localized" only means that reason was selected most from among the reasons provided on the vote-to-close screen. (On occasion, the motive(s) for closing a question won't exactly fit into one of those reasons, and something like "too localized" will get chosen when a question seems, say, too ephemeral.)

Here's a screen shot, to help give you a better idea of how this works. In this example, three people have voted to close already: two picked "too localized," and one picked "not constructive." I could select "off-topic," and someone else could choose "general reference." At that point, the question would have garnered five close votes – for four different reasons – yet the close message would only say "too localized," because that option was selected most out of all the choices provided. 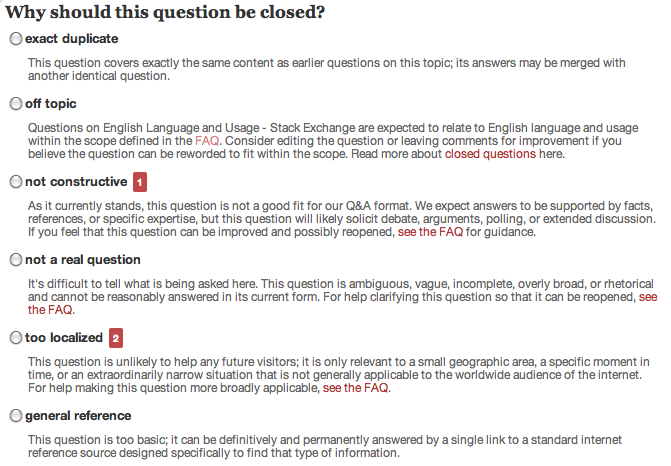 It has been closed because the majority of who voted to close the question thought it was not helpful for any future readers. A question on Stack Exchange site should not be relevant only for who asked it, but also for future readers. Too localized doesn't mean it was out of scope; that would be an off-topic question.

Don't get confused from the phrase used in the description ("an extraordinarily narrow situation that is not generally applicable to the worldwide audience of the internet"). It doesn't mean the question must be useful for most of the worldwide audience; it just means it is not thought to be useful for future readers, probably because normally nobody makes any distinction between ephemeral questions in the FAQ, and questions that are not ephemeral. The fact the question got answers that are equally valid could have had a weight in the decision for closing it.

Bear in mind that a questions can be re-opened, if there are five users who vote to re-open it.

20
Close Reason Comments
-1
How to identify my self that my question is too localized and how can I get answers for those questions?

4
Add a note about questions that have been asked, and that should not be asked anymore
4
Why was my question closed as 'too localized'?
6
Is a question on slang and how it'd be received amongst native speakers acceptable?
2
I need a better answer for why my question was closed, so that I can become a better user
15
Are questions about the use of italics in English off-topic?
6
Is the vocabulary tag helpful?
7
To what extent is analyzing poetry or verse off-topic?
2
(“on hold” again) Why is this question closed, when the reason listed does not seem to be correct?
3
Three SWRs suddenly closed for being POB
3
Questions about user interface design/wording