Why was this question about word choice closed and sent to Writers?

As per the FAQ here, questions about word choice are clearly on-topic. However, this word choice question was closed and sent to writers, where these questions are very clearly off-topic. It's possible I'm missing some subtlety here, so I'd like to understand what's going on.

On Writers, we discussed this in meta a bit before closing a couple of word choice questions. While I migrated a simpler word choice question here to EL&U, the other one (the one I linked to above) started life here and was closed. The user who started this question seems to be, understandably, a bit confused.

So why was this question closed and migrated? Do the translation aspects of the question confuse the situation? Did a bunch of users just not like it? I'm not a 10k user or mod here, so I can't see the question, which has been deleted.

Do you have a bunch of users who hate word choice questions and just vote to close them? Is there something I'm missing here making this question unsuitable for ELU?

The only thing I can tell you for sure is that five community members closed it as off-topic. No mods were involved. If even one of them suggested it be sent to Writers, the system would have automagically done that as soon as it closed.

I don't know why one of our members thought it would be a good fit there. I am also not certain why, of all the word choice requests we get, that particular one went to you. Maybe someone else can shed some light there.

@MετάEd I don't think "translation" had anything to do with my question being closed. I did not mention anything about translation in my question when I posted it in ELU. All said and done, my question was really a word request. (I didn't think people needed to know about the translation aspect here. My final work will be read in English. It won't matter to the average reader if it's a translation. Any word or phrase I use will be judged by how it works in English.)

I only added the background information about it being related to my translation after the question got migrated to Writers. I did this because I think the audience there is very different from ELU. They needed to know that this was a translation and there were certain constraints I was working with. (Otherwise, the first natural reaction would be "why don't you rephrase?")

I edited my question once more, a long time after it had been put up at Writers. A good alternative had struck me as I was working on something and I thought I should it put up it on Writers. I thought since a long time had passed I could edit out the part that it had been migrated and that I was adding background information to my question. This was how the question got it's final form.

PS: I'm not sure everybody can check the edit history of my question. I'm attaching an image capture just in case.

(Oh and in case anyone's interested, the phrasing I finally zeroed on is "a miasma of death") 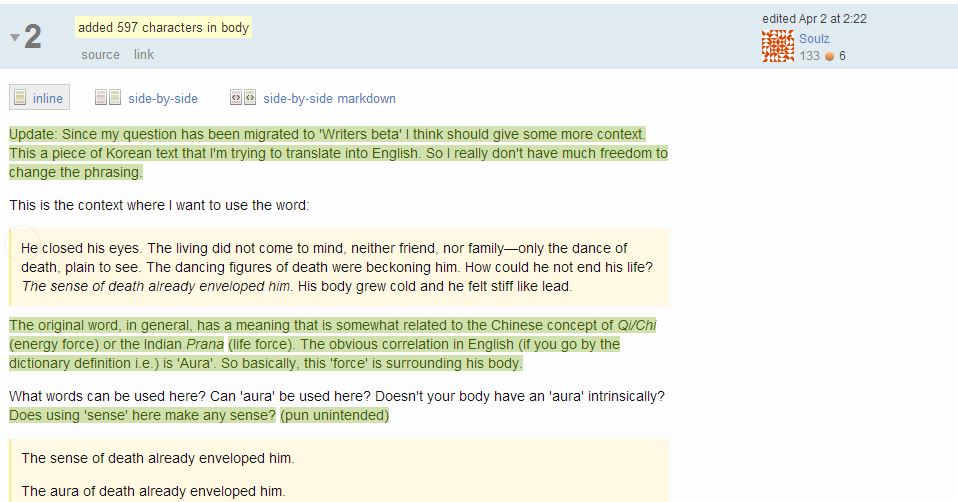 I agree with @MετάEd's answer (obviously a minority position, with currently a net -2 votes).

I assume there's no significant dissent from the "translation is Off Topic for ELU" principle as so eloquently defended there. It's worth calling attention to the first two sentences of the question...

This a piece of Korean text that I'm trying to translate into English. So I really don't have much freedom to change the phrasing.

It's somewhat irrelevant whether the OP had originally included those words, since obviously that was always his position, and would always constrain his willingness to accept any given answer.

I had assumed that "translation" aspect caused the question to be closed on writers, since it precluded the possibility of "creative" answers involving significant rephrasing. But per Neil's comment below, that's not actually the reason.

Turning to the matter of why I think the question is Off Topic for ELU, I don't see the translation of a single word/phrase as inherently Off Topic here. For example, even though this ELU question hasn't had much attention, or received an unambiguously "correct, universally endorsed" answer, the OP gave a precise definition of the meaning he sought, so answerers didn't need to be familiar with the Japanese term which had prompted the question in the first place.

The difference between that "acceptable" question, and the case in point here, is that Yoichi could reasonably have supposed there might have been a single "correct" answer that we'd all agree on.

But all answers to the question under consideration here are inherently subjective, since there isn't (and probably never could be) a standard term for "sense of impending death" in English.

I will also make the point that within the question lies a "supplementary" that I consider to be completely On Topic (for both ELU and ELL; I can't decide which is more suitable)...

the sense/aura of death - is there any difference in meaning if the article 'the' is changed to 'a'?

...but so far as I can see, not one of the seven answers addressed that "valid" component.

To the author of the original question:

The ELU community consists of English experts. This is why translation assistance is off topic per the FAQ, even when the question is otherwise on topic. When you ask a translation question, you are putting your question beyond the community's expertise. Even if an exceptional expert could answer correctly, most of the community would be unable to review it for correctness.

You could try to restate the question to take the translation aspect out of it. In my experience, that mostly doesn't work. You typically end up with correct answers which don't satisfy the ultimate need for a correct translation.

If you still feel you can make the question work, I strongly recommend you post the original Korean passage you are trying to translate. The community already has one hand tied behind its back when you ask it to help with translation; no need to tie the other hand too.

To Neil: I hope this sheds some light on why such a question might be closed at ELU even though it has to do with word choice.

Not the answer you're looking for? Browse other questions tagged discussion closed-questions migration single-word-requests .