I would like to propose a possible solution to serial anonymous downvoting. Sometimes the phenomenon occurs within a short space of time, and in that case the system detects the voting irregularity and within 24 hours reverses the downvotes. This system works and is an effective deterrent to would-be revenge-downvoters, as it means they are also identifiable to the moderators.

But what happens if the series of downvotes is spread over a distance of time? With not one downvote explained, justified or used as an aid to help the user improve his or her question. What then? 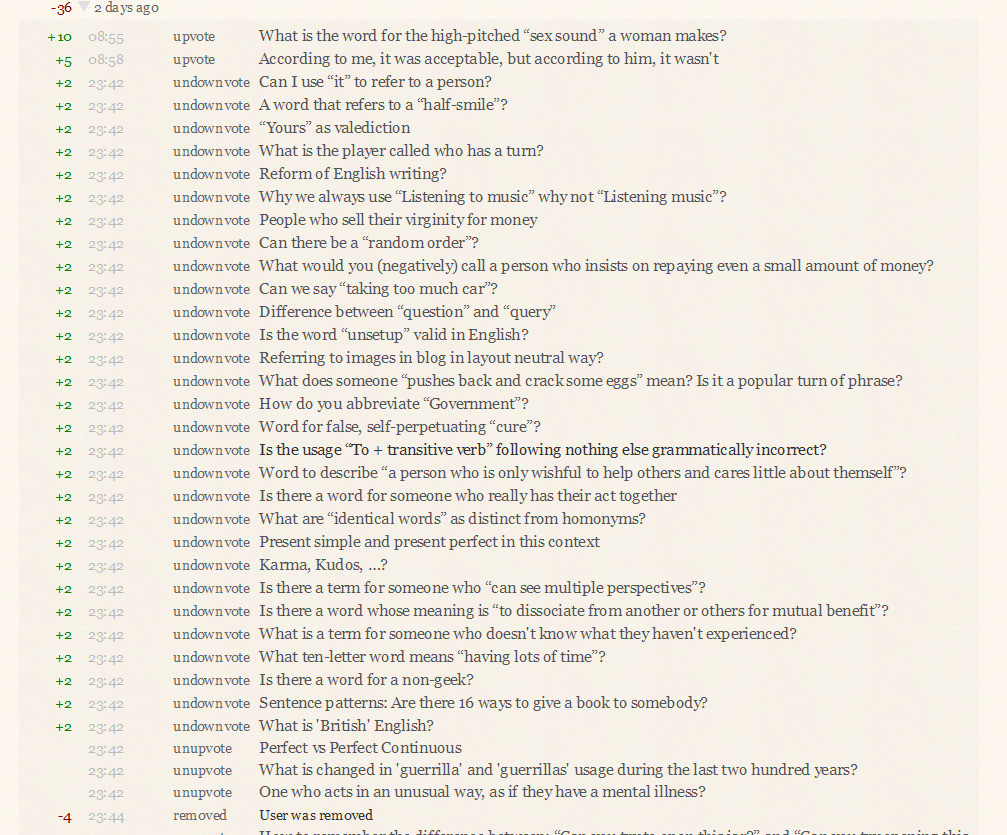 That's an impressive list, isn't it? :) I'm not insinuating that I didn't deserve any of the downvotes. I'm not suggesting that the person responsible did not have any good reason for not downvoting. What I am saying is that this person, (who no longer has an account in ELU or in ELL) systematically and deliberately downvoted my questions and answers anonymously. And because his account has been deleted I know exactly who the user was, which makes the downvotes that more unpleasant and sadder. And I swear if he had once or twice indicated why my answers or questions were weak, I would have listened to his criticisms and have adjusted my answers accordingly. But he never did.

Once, confidentially, when I was unaware of his duplicitous behaviour, I even asked him why I might be receiving so many downvotes. He said I sounded too arrogant and lacked humility. Well, that was a shock. But I listened and thought maybe I do sound like that. Maybe the voice which I hear in my head while I'm writing is different from the one others hear. Nobody wants to be disliked, even if it's on the Internet; it's a fact. Consequently, I attempted to soften my comments especially on Meta, and tried to be more diplomatic. Funnily enough, things improved a bit, and I thought my "advisor" had given me some sound advice. Ha! (That's an ironic "ha!" by the way)

I have to say in his defence, he also upvoted a few of my answers and questions, but he would nearly always leave a comment. Now these few sparse comments have been deleted along with his account, which explains how I know who the person was.

Anyway, here is my idea on how to discourage anonymous downvoting. It is something which I suggested some time ago on Meta Stack Overflow but it didn't make a chink in that sea of comments, arguments, discussions which have engulfed that thread. See the link below.

I don't think it is an infallible solution, and for high rep users losing five points is peanuts but... at least they will be some form of penalization for anonymous (at times inexplicable) down-voting.

I would have written an "answer" but I haven't nor ever will, earn 10 rep points, on this site so, I have to make do with a long comment. I read one suggestion made by mg1075 who might be onto something. What if instead of [earning] a badge, as he suggested, for every five downvotes with no comment you lose five rep points? Cont'd. – Mari-Lou A Sep 17 at 7:32

Cont'd ... This will still allow leeway for: 1. You just want a quiet life and no hassle. 2. to explain why would take too long. 3. Your downvote is confirming the general consensus that an answer is incorrect. 4. You're in a mean mood. But on the 5th consecutive downvote you would need to make a constructive legible criticism. Anyone who writes a mangled comment would be immediately spotted and be flagged by the community. I'm not sure if this idea has already been suggested, so apologies if it has been and was rejected.

Well, to play devil's advocate, I don't have a problem with anonymous downvotes because I think the downvote tooltip explains the purpose well enough. (So do other comments on the post; so do close votes; and so on and so on.) I do have a problem with systematically targeting a particular person with downvotes but that isn't the same problem.

As for the particulars in your suggestion:

for every five downvotes a user leaves without a comment he should lose 5 rep points.

If the user explains one downvote in five, no change in rep points occurs.

They already get a rep hit for downvoting which somewhat implies they don't mind taking the rep hit. So... effectively removing an extra point per downvote isn't really much of a deterrent.

On the fith consequetive downvote a visual reminder should appear advising him/her to leave a comment.

Since I don't think downvotes need comments I don't really care about implementing this. Moreover, trying to force people to leave explanations of downvotes is actually a great way to make those people targets for retribution voting. This happens enough as it is and I would rather let people opt out of the drama/argument around whether a particular question or answer deserves a downvote.

The downvoter needn't specify he or she is a downvoter, as long as the comment is constructive and legible.

How are you suggesting enforcing "constructive and legible"?

Any user leaving meaningless incoherent comments or insults ought to be flagged by the community, and have 5 points deducted if he/she refuses to edit their comment.

StackExchange already has guidelines for comments even though most of EL&U ignores the recommended purpose behind comments. Which is to say that you can already flag comments that are incoherent, meaningless, insults or otherwise unhelpful. (I personally don't bother because EL&U seems happy with their comments and I have better battles to fight.)

In the end, I sympathize with your plight but don't really think it needs any drastic attention or policy/feature changes. Chances are high you can outgrow any targeted downvoting by continuing to post valuable content and reaping the benefits thereof.

Votes serve a different purpose to comments. Votes crowdsource the value of the post as is. And that is the primary purpose of the site: to identify good questions and answers based on votes.

It is true that comments can provide constructive suggestions, but they should not be tied to votes. Comments are helpful but they are secondary. Votes are what make the site work, not comments.

Votes without comment are beneficial, not awful. They let a person vote their conscience without being targeted for criticism.

Personally, I look at the average of the votes I'm getting. If I'm getting mostly upvotes, my post is on the right track regardless of the comments. But if it's controversial or mostly downvoted, I try to improve it, whether or not there are comments to guide me.

If someone has decided that I need serial downvotes, that's their problem. I don't want to internalize their unhappiness. Its effect on my reputation is trivial. It disappears in the noise. I just let it go like water off a duck's back.

Before suggesting a solution, could you identify the problem more clearly? Serial downvoting certainly is a problem, but one that the mods know about and can usually solve (as they did here). Anonymous downvoting is not the same thing and is not, as far as I know, a problem. There may be many good reasons to downvote, and many good reasons not to leave a comment saying that you downvoted. (One of the latter is the number of users who cannot accept any criticism whatever (eg this question), and will, if they find the identity of a downvoter, continue arguing and complaining beyond any sensible resolution; but there are others.) Anonymity of voting is an important part of the SE philosophy; there is no logical reason why you should have to justify a downvote any more than you should an upvote. And the comment threads are often overloaded as it is; why would you want to compel extra verbiage?

For clarity, I don't think this is a bad solution; but I do think it's a solution to a problem that doesn't (or at the very least hasn't been shown to) exist.

9
Should users with many down-votes on a meta site be banned from asking questions?
0
Whats with severe downvoting?

7
Is there a way to search for questions/answers I've commented on?
4
Can we have a feature to opt-out of "reputation"
3
Avoid allowing users to propose another edit within X minutes when previous edit proposed from same user and for same post has been rejected
10
What about downvoting comments?
2
Basic problem with comment deletion
10
Where can I find a linked list of my answers to deleted questions?