Questions are getting closed as duplicates, when they shouldn't be

It seems to me that one of the more serious problems on this site is that a good question often ends up getting erroneously closed.

By erroneously closed, I mean that the OP's thread is marked as a duplicate and a link is made to a thread that doesn't have a proper answer to the OP's question.

After a short period of time, I'd expect the member(s) to get better at it: live and learn, so to say.

When votes are taken to close a thread, I'd hope that there would be some members voting who would see that the closing would be erroneous, and so, prevent that closing. I would hope that's how it works. But in actual practice, it doesn't seem to be working out that way.

I've seen numerous threads closed as duplicates, and when I click on the link to the thread that's supposed to have the answer, I often find that the thread doesn't address the OP's question, or when it does, it has a bad answer. Often that old thread simply has bad info throughout it. This has happened many, many times.

The procedure for closing threads as duplicates might need to be tweaked. It probably should be changed. It needs to be fixed, imo.

There is no way to vote against closure on StackExchange. The best we can to is to state our positions in comments and on Meta (which may convince people to retract their close votes). Once a post is closed, we can vote to reopen, which takes time. If you feel that a post has been closed inappropriately, please question it on Meta and, if you have sufficient privileges, vote to reopen, which will put the post in a queue where other privileged users can see it. Editing the post to address the close reason also helps. (But beware of editing it to say “This shouldn't have been closed!” which sounds presumptuous and may turn off people who would otherwise have agreed with you.)

How to retract a close vote – see the bottom of the form: 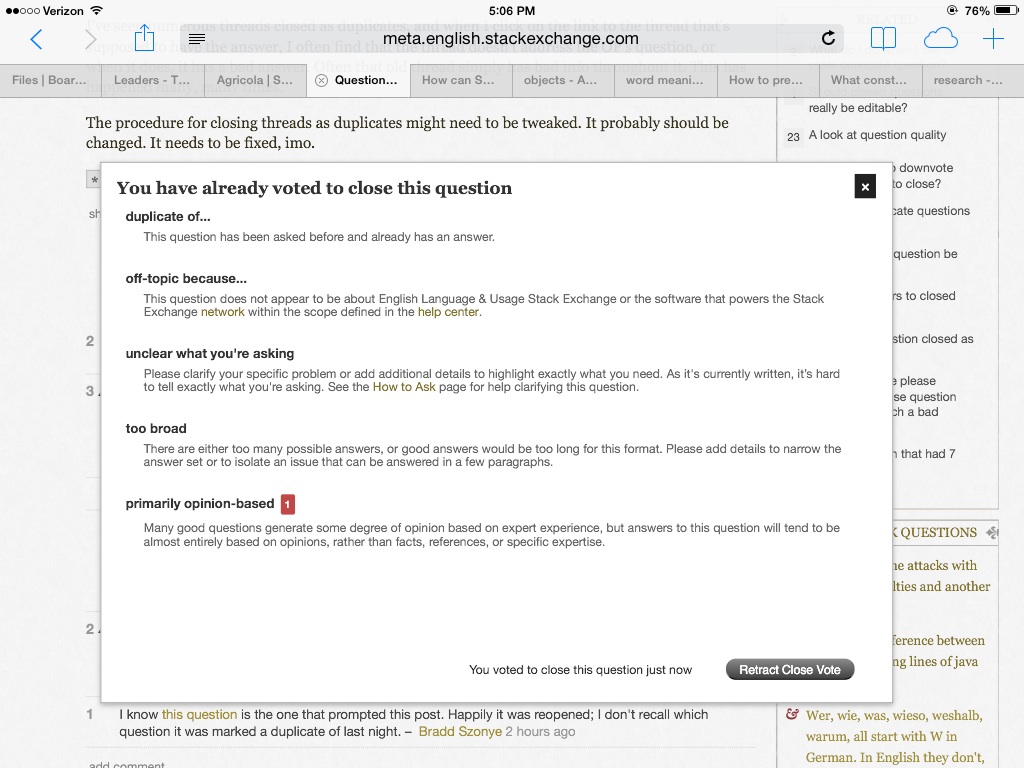 You can also vote to “leave open” in the review queue for close votes, but that does not directly count against the close votes. Instead – if enough people vote to leave open – it simply accelerates the close-vote aging process. See this MSO post for details.

2
Should closed questions really be editable?
7
Deleting answers to closed questions
5
What policy exists on answers with inclusion of cultural context to English usage?
14
Lots of questions on the plurality of collective nouns, sets, and organizations
1
Can we prevent this question from being deleted, please?
16
Why are etymology questions that show research getting/staying closed?