What is the discussion tag for?

Some people seem to have an opinion that a meta thread is not a suitable place for discussion as the comments of this thread show. Hence my title question.

Discussion is appropriate on meta, based on MSO precedent [1] [2], as well as FAQ guidance. It is true that the Stack Exchange platform is not well-suited for discussions, but chat is often not an appropriate place for site discussions, for several reasons in the aforelinked post.

As to the specific case: Your question has been closed as a duplicate of your earlier question, and I do not see good reason to reopen it. I think your previous question received good answers, and as it has not been closed, I do not think there is anything further to be done in this instance.

It seems to me the "difference of opinion" on the linked earlier question is about exactly what kind of "discussions" should be conducted on SO sites.

So far as I'm aware, most ELU users agree with me (and with those arguing against OP on the earlier post). We think the "discussion" tag on meta questions just means people are encouraged to post what they think in respect of the issue being raised. An example of that being the "answer" I'm currently posting right here and now.

I'm not expecting to engage in a protracted back-and-forth interchange of ideas through comments here. We have our main chat room for general-purpose discussions, and if anyone wants an interactive discussion focussing on a specific issue, they can always create a chatroom just for that.

Obviously there will always be a certain amount of comment -> response -> counter-response ->... Plus people often post multiple clarification, supporting evidence comments under their own actual question or answer, even when they should more properly edit the original post.

But in general we don't really want the main/meta Q&A sites to be used to "kick ideas around" interactively. If you don't already know exactly what you think, and you want to explore an issue interactively to help firm up your ideas, do that in a chat broom, then post whatever you eventually decide is your contribution to the "question" - so people can vote on whether they agree or not.

Meta sites do permit some discussion. However, even here, the developers discourage extended discussion in comments. Please note the bold warning above the comment box in the image below. Also see this MSO post. 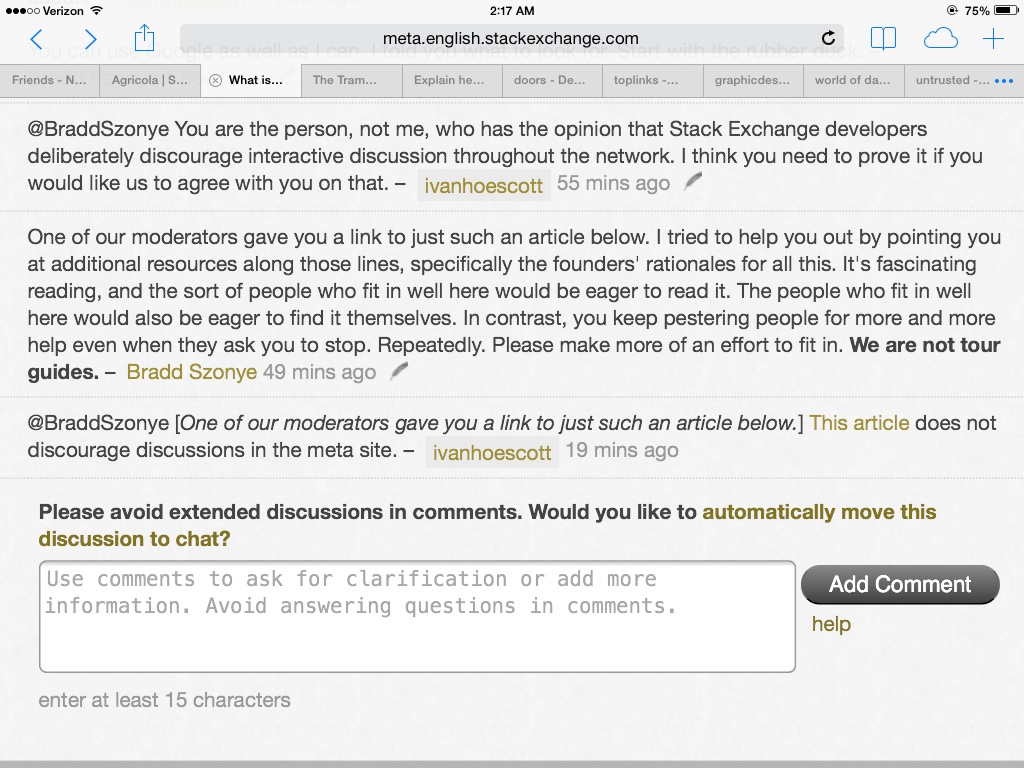 6
Does this question qualify as off-topic peeving?
8
When does discussion veer off-topic in questions related to discrimination in language?
33
What the f*** just happened?
11
What the “primarily opinion-based” close reason is for
4
The “bare/bear with me” question: what should we do with it?
6
Is there a better alternative to using low-vote answers for discussion?
2
Quantifiers? Premodifiers? What's the best general tag for questions about “X of Y” constructions?