Where a question has an accepted answer, should we encourage new answers to be useful?

It seems — having had to deal with a quite a number in the last month or so — that most "answers" to old questions with an answer which is already accepted are in fact anything but an answer.

The most recent is:

Once a question has had such an answer, it's bumped on the site front page and tends to attract other answers which it seems are generally, although thankfully not always, of a similar quality.

Should there be a banner above the "Post your Answer" button advising users that there is already an accepted answer?

Such a banner would not necessarily prevent anyone from posting an answer, and it might be limited to users under a certain rep level, or to questions which are of a certain age.

It could be useful to have the system automatically protect questions when an answer is accepted (that is, prevent users with less than 10 rep from posting new answers), but this is probably unnecessarily restrictive; everyone has to start somewhere — even if starting on an old, accepted question is probably not the best place.

This Meta question asks only whether we should be reminding users [some users] that they should be posting something useful.

I want to believe there is a way to encourage people to stop posting answers that are just deteriorated echoes of other answers, or worse. There already is a notice that pops up for unregistered answerers: 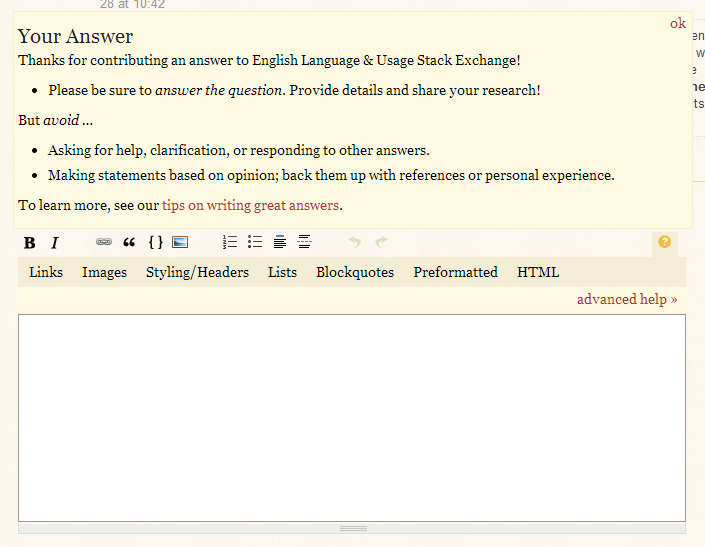 It moves the text box out of the way to display itself, so is very obvious.

I applaud your suggestion, but I'm not sure people who want to post something will read it.

Not the answer you're looking for? Browse other questions tagged discussion feature-request .

16
Extraordinary spike in low-quality questions by 1 rep users
21
Add new reason to flag answer: Adds nothing to answers already given?
2
Random question protection
5
Overuse of "possible duplicate" claim to evade or disqualify answers?
31
Answers in comments
10
Should accepted answers appear first, just above the highest scored answer, or should answers now appear only in order of score? (Vote by Oct. 19)