Can we add English Language Learners to the "belongs on another SE site" list? (When will ELL move out of beta?)

For close votes, we are provided a number of reasons. One reason, in particular, is for being off-topic because it belongs on a different Stack Exchange network, takes you to a list view of related and potentially appropriate SE network sites for the question to belong.

I've always hated this implementation, because it is a very short list on every SE network site (it really should just be the same accordion menu as the site's top-left StackExchange site list), but EL&U, I think, takes the cake; the only option on the list is EL&U meta. That means this specific option for CVs is nearly useless (I don't think the majority of questions asked here that belong elsewhere really define "elsewhere" as "EL&U meta").

I understand that sites usually have to come out of beta before migration can occur, though that's not always necessary. Well, English Language Learners has been in beta for over 1.6 years now (is SE trying to mimic the Google model?), and seems to have passed beta requirements with flying colors, so when (will ELL move out of BETA?) might we add it to the aforementioned list?

There is great confusion about what makes a question suitable for migration. The main problem here is not the betaness one. That’s a red herring.

Rather, the real reason the migration list is always a very a short list on all SE sites is because users, even experienced ones, have time and again proven themselves to be poor judges of what counts as a valid question on the receiving site. Instead, when they just don’t like the bad question, rather than downvoting or closevoting, they try to sweep all the dirt under somebody else’s rug. That makes things worse, not better.

More and more, question migration all across the SE network is being left in the hands of moderators, who normally contact the mod team of the other site to negotiate a hand-over. This makes more work for them, but not so much as it would make if any three users could send garbage questions whithersoever they pleased.

Notice how even with negotiated mod-instituted migrations, about one in every six questions which the ELU mods emigrated to ELL failed migration: 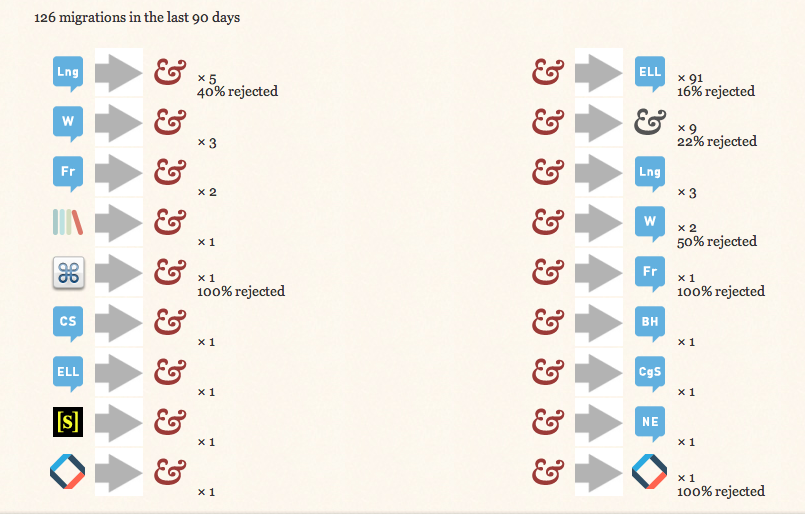 Even on SO, where regular users are given a full list of five migration targets: 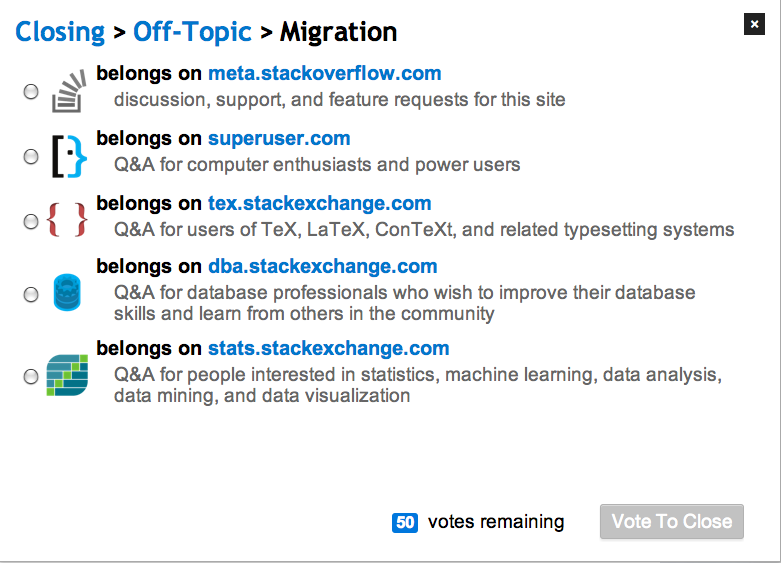 Now notice the failure rates, and which are to site not on the above five: 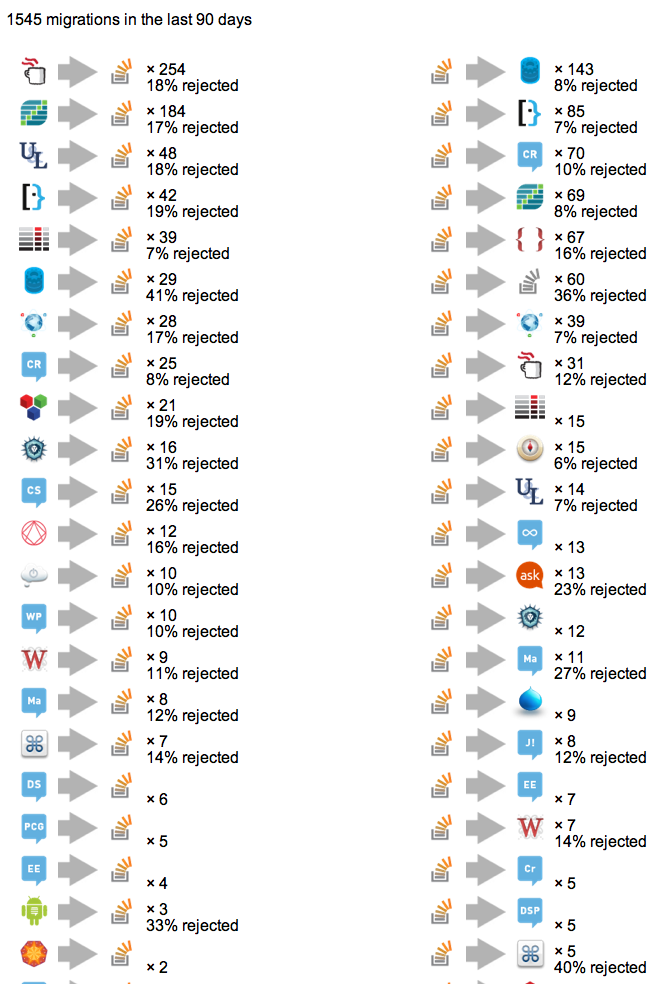 Anything that is blue-for-beta migration site is one that was a mod-only migration, and even these still fail.

I believe that no matter whether ELL is a beta site or not, that making it an available migration target to non-moderators would result only in a higher rate of failed migrations. This is because too many ELU users are unfamiliar with ELL or consider it a dumping ground for poor NNS questions.

I therefore do not see how having more failed migrations would help anything. I have a hunch that it would hurt things, even.

If you believe something should be migrated, flag it for moderator attention with a custom message to that effect.

Not the answer you're looking for? Browse other questions tagged discussion appropriate-questions vote-to-close migration .

43
Should we have a migration path to ELL?
101
A friendly reminder: ELL is not EL&U's trash can
33
Has anyone thought about changing the name of this site?
23
Allow Questions to be Closed as Off-Topic and Migrated to ELL
27
Proposal to fix the uselessness of the new off-topic close options
9
Add ELL to list of sites for off topic questions
5
Closing a question: How are migration possibilities determined?

4
Does rhetoric fall under EL&U
17
Can we add Linguistics SE to the migration path list?
27
Proposal to fix the uselessness of the new off-topic close options
87
This is not a site for "serious English language enthusiasts," and it never will be
9
Should I go to the “English Language Learners” site?
7
Could/Should we create a collection of exemplary questions to encourage high-quality asking?
4
Addressing the responsive EL&U site theme - moving forward