Yesterday, Mari-Lou A told me one of my posts wasn't formatting correctly (I forget which one). But I couldn't see anything wrong, and while we were exchanging comments (to the effect that both of us were using the Chrome browser under Vista), apparently her problem went away.

A few minutes ago I noticed that this post of mine was completely misformatted. Using "edit" to check the actual text I got the impression things were going wrong wherever I'd used asterisks to delineate italicised text.

As I write this text, I see that the word "asterisks" above isn't displaying correctly (presumably because of the asterisks enclosing it). But "this post of mine" displayed correctly for me when I opened that page to get the address for a link here.

If it hadn't been for Mari-Lou, I'd just assume my system is internally messed up. But as I write this I'm using Chrome under XP. So I don't think this is a browser or OS problem, and I doubt it's peculiar to just us two.

This looks like a bug. Does anyone know what's going on?

This might be a valid screenshot of this screen (I don't see the second "this" there)...

EDIT: I don't recall rebooting the XP machine this post was written on yesterday. It's my "home network server", which I usually turn on/off when I get up/retire. I did that today and everything displays correctly.

Since two users have just experienced what looks like the same problem under two different OS's, I think this post should remain open in case it affects others in future. But I don't know if "problem resolved itself without explanation" is a valid reason for removing the bug tag, so I'll leave that for others to decide. 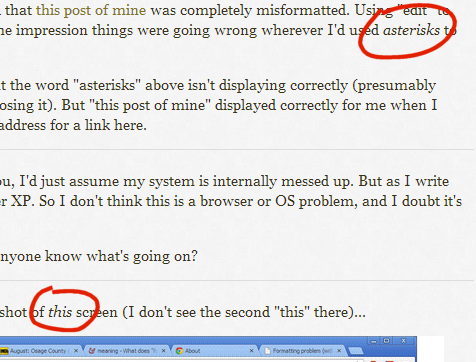 Updated to Version 39.0.2171.95 dev-m and it looks the same. So, it's either something to do with XP (although Cerberus sees nothing unusual), or it's a glitch with fonts on your computer. Even that is slightly odd, because the page title uses Georgia Italic, and that's fine. It may be something to do with how your machine renders that font at that particular size.

Currently I'd say "Can't reproduce", but if it only affects Stack Exchange pages, and others chime in with similar experiences, then it may be something to pass on to developers.

I take it you have rebooted the machine? That sounds like a cop-out, but it clears data held wrongly in memory, allows pointers to be reset and the like. It can fix problems with fonts.

Not sure if it's okay for me to post this as an "answer". But maybe it's better than cluttering up the original question. Anyway, here's another screenshot (on Chrome+XP)... 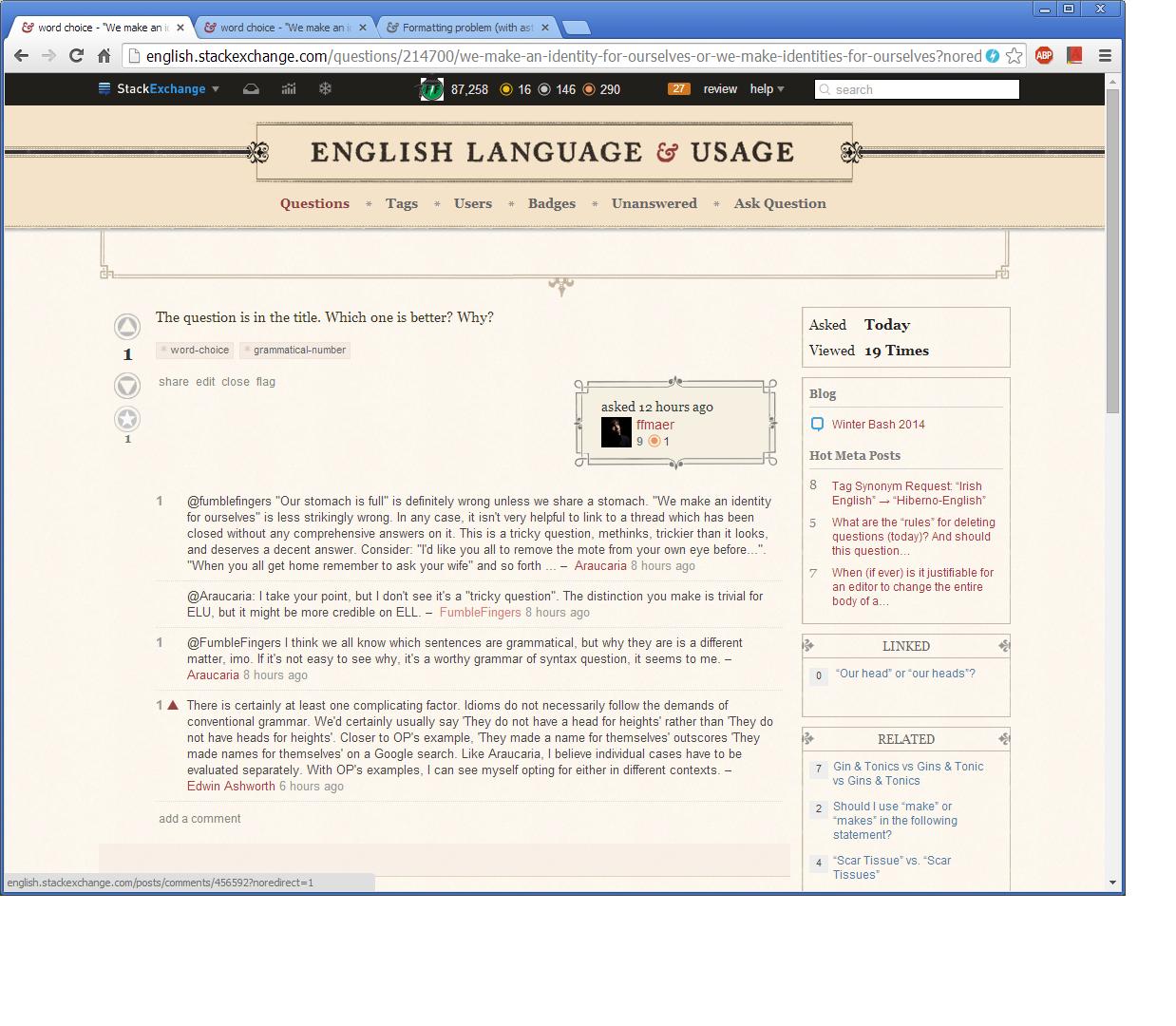 ...where the question title is missing. As soon as I saw that, I opened another browser window and went to the same page. Here's the second tab, where the title shows correctly as I write... 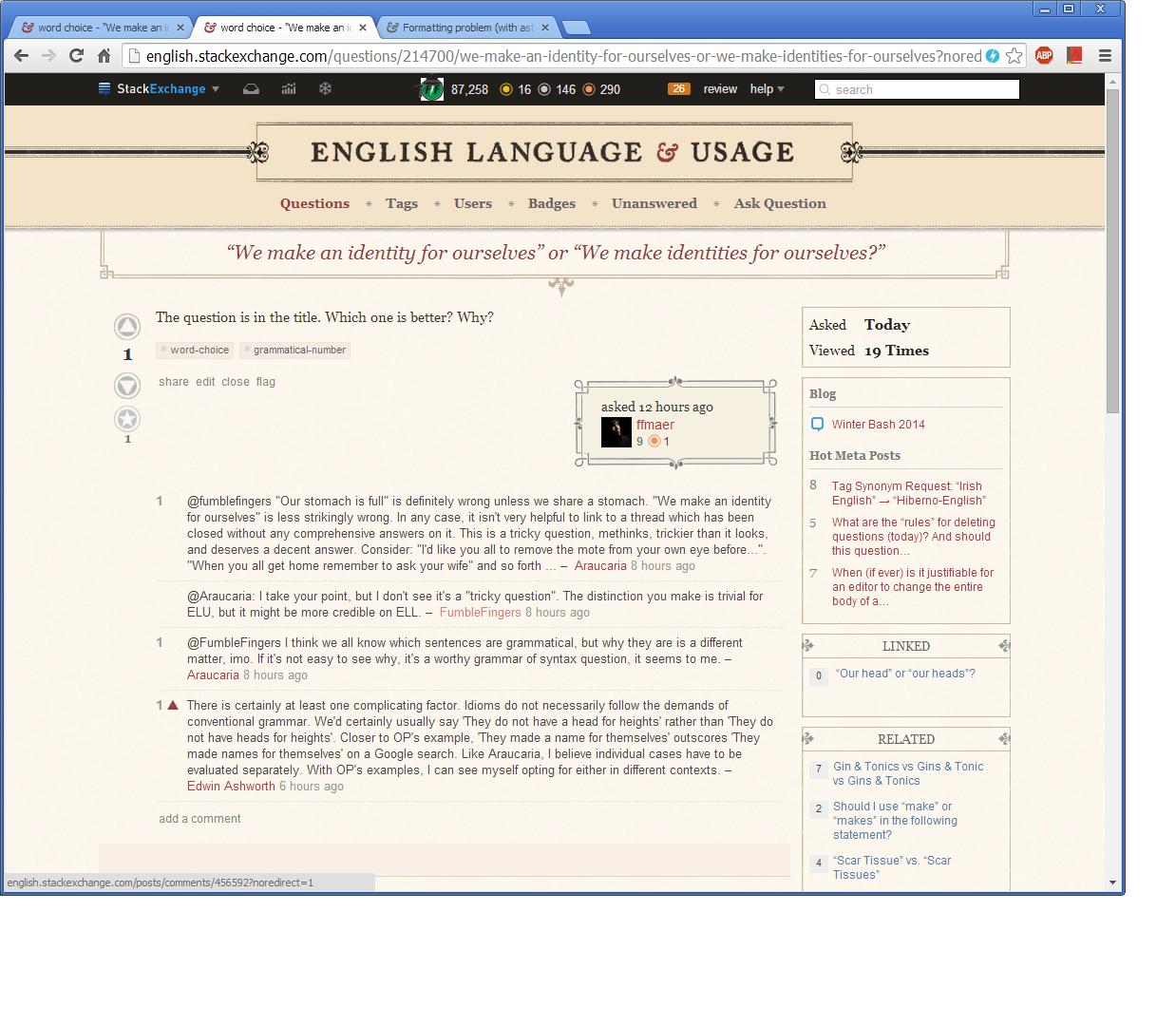 In this case, there are no asterisks around the text that's not displaying correctly, but it is (or would be) in italics because that's hard-coded within the UI. It may be worth taking special note of the fact that both the valid and invalid display are right there in two different "tabs" on the same instance of the Google browser (the third tab in the screenshots is the one I'm using to enter this).

EDIT: GARRRGH!!! - I haven't noticed any more problems with missing italic text that hit me for 2-3 days starting a week ago, but today I've just had this. The large digit 0 for this "question net vote score" is missing (but displayed correctly when I copied the address into a new window). In the absence of any useful pointers, perhaps I'll do a full system restore... 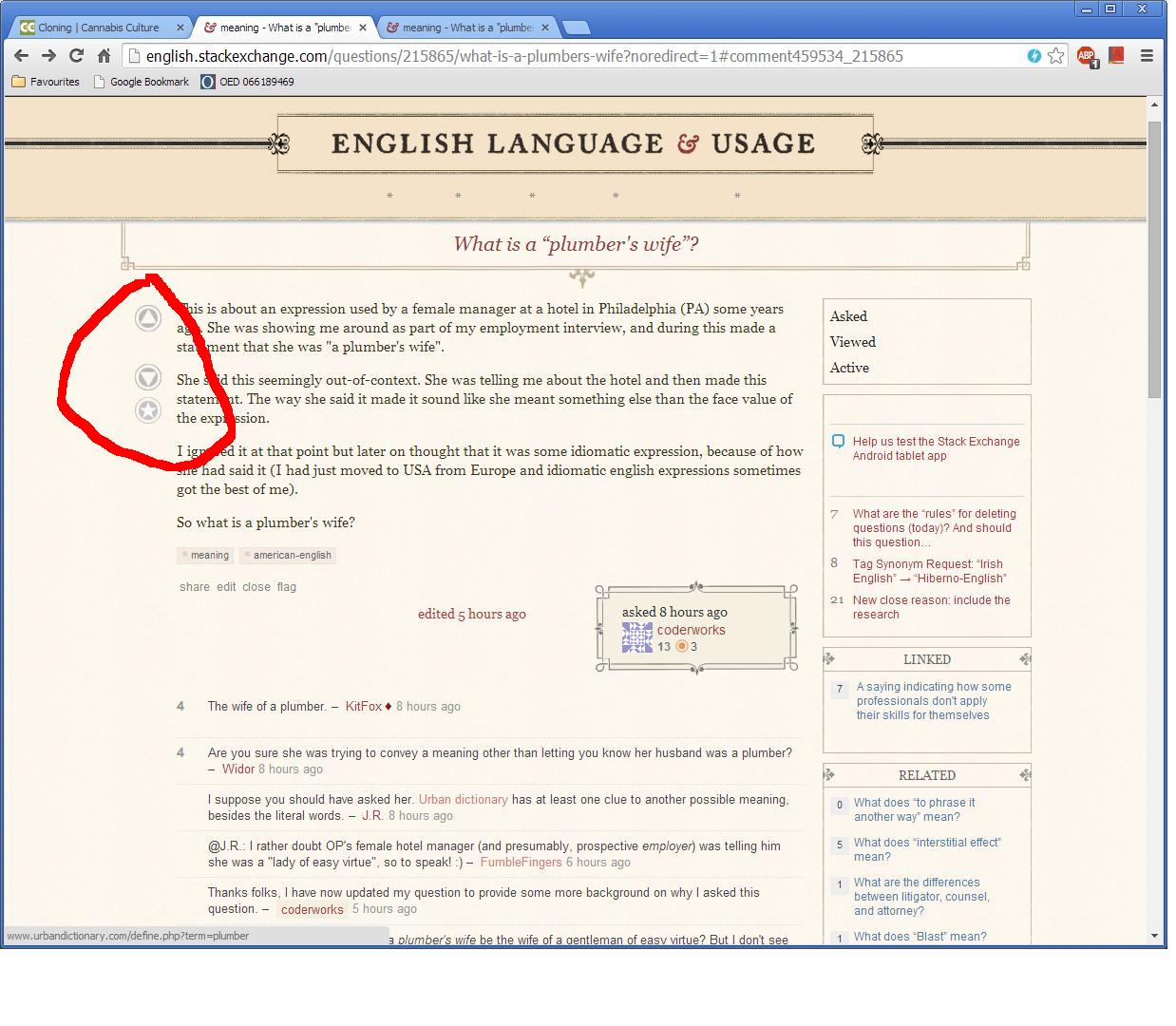 It's happened to me again. There are blanks in place of words in bold or in italics. This is what I currently see on WS2's question

I would give you its title but that's gone as well...

Time to switch off. Night.

Not again!! Can someone help me? Please?

Uninstall Chrome, reboot, and immediately re-install Chrome. It at least helped in finally getting rid of the adware and malicious programmes that had infested my browser (together with manually deleting 200 files... but that's another story.)

Not the answer you're looking for? Browse other questions tagged bug .

6
Side bar formatting problem on the elections page
5
“Editing help” page formatting appears broken
15
Formatting comments is such a hassle
7
10k tools flags page display problem
9
Improper formatting of Welcome box
3
URL with parentheses not correctly parsed
3
Meta reputation is not in sync with the main reputation
0
Inconsistent link treatment in old answers under the new design?
7
Have any ELU users experienced a recent large loss of rep explained as “User Removed”?