Certain users don't show up in the Users tab

Playing around with the Data Explorer, I noticed two users with remarkably similar handles, Zhak Maarli and zhak maar li. Curious, I went to the Users tab, searched for "zhak", and... got zero results.

The users do exist, though; they haven't been deleted in the mean time, and I even logged out to verify that I don't see them due to my 10k powers or something (which would be news to me, but who knows):

Going by the rep, the first user should appear on Page 75 in the Users tab, but he doesn't: 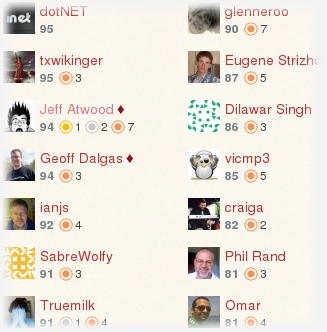 Similarly, I would expect to find the second user on Page 79 or Page 80, but he isn't there.

I did notice that both users haven't logged in for more than three months, but that can't be the reason (case in point: Ex-user, who's still listed on Page 1).

That leaves me wondering how many other users might be missing from the Users tab and why.

Searching the meta Meta, I have only found this, which raises more questions than it answers.

Only registered users show up on the /users page; it's always been this way.

Not the answer you're looking for? Browse other questions tagged bug status-bydesign user-interface user-accounts .

3
New Design: Can we increase the contrast between certain items?
4
Do suspended users see when they are suspended and how long they are suspended?
1
When I click on the "How do I search?" header, the browser shows me the top of the page
7
Related tags don't have thousands separators
2
Bug in the late answer queue?
2
Why are all the questions about money?
1
Review result page did not show the actual post
2
Why doesn't a letter show up when enclosed in < and >?