How can we encourage more folks to edit?

My question is simple: how can we get more people to edit postings so they look better? There are badges, but it doesn’t seem to work:

Currently, most of the edits on ELU are done by a very, very few people. Watch how fast the number of edits per user drops by a full order of magnitude from that of our top editor: 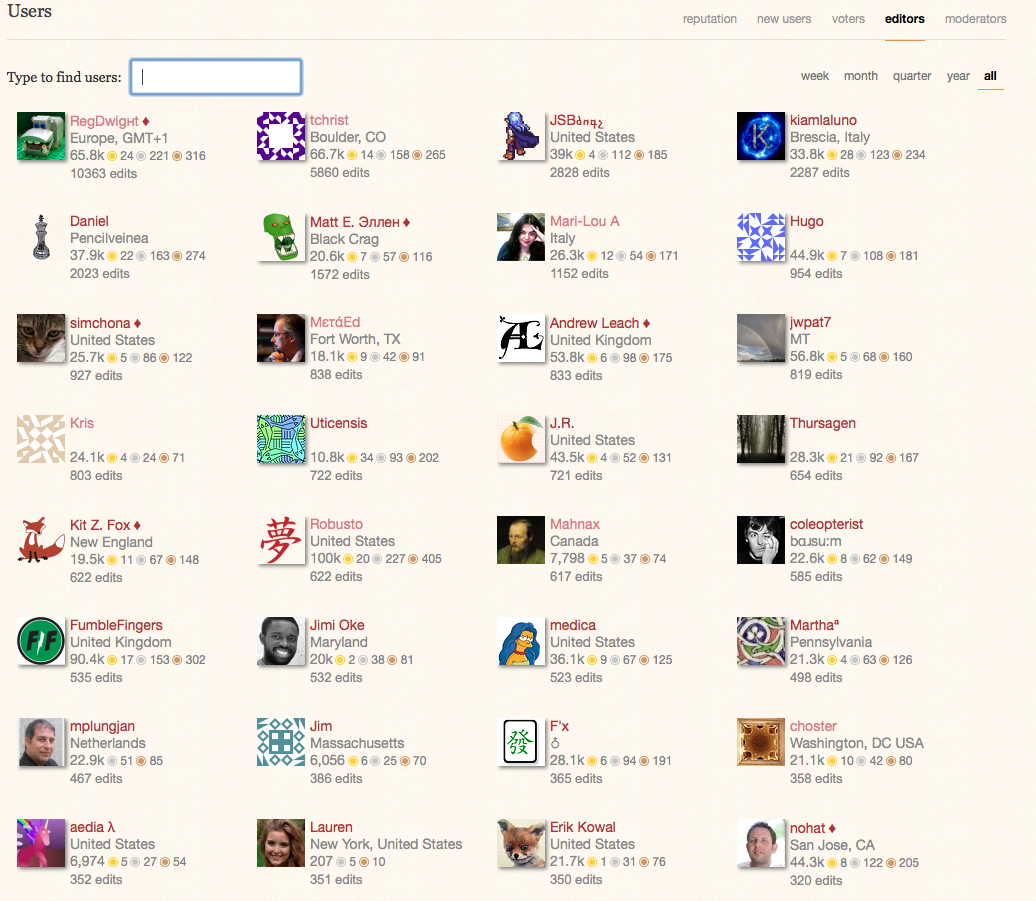 So there are only 5 of us between Reg and Mari-Lou, by which point we’ve lost an entire order of magnitude.

The silver Research Assistant badge for editing 50 tag wikis is also extremely rare, having been so far awarded to only 4 members in all of ELU history.

The top 25 editors collectively account for more than three quarters of the edits (64043/83599). However, even within that group of the top 25, as you can see from the numbers above, it drops off precipitously after the first few rows. Here’s another way to look at that data, using a slightly different counting metric:

Yes, that’s right: in the SEDE ranking above, just between Reg and me we two alone account for 3 out of every 8 edits overall, or about half of those done by the top 25 put together!

Is there anything that the ELU Community can do to get more folks to help out the few of us who are currently doing the bulk of the work (read: the top n people listed above) to put an attractive fresh coat of whitewash on our nice picket-fence so Aunt Polly doesn’t scold us?

It will make our site look better, and it really needs more hands at the task.

The (possibly overlapping) reasons I can think of that might discourage people to edit less-than-optimally phrased questions are as follows:

1) The question is not interesting enough, or seems too parochial or restricted in its scope, to stimulate much desire to improve it.

2) Users might suspect that the question is so unsalvageable, or so off-topic, or so likely to be a duplicate of another question, that it will probably soon be closed or deleted. In such a case, most people will not want to expend time and effort on attempting to improve it. If they have enough reputation points they too may prefer to vote to close the question than get involved with it in some other way. (This is probably a good thing: at least they will be helping to prevent the accumulation of more dross.)

3) Some users (especially non-native speakers of English) may lack enough confidence regarding certain aspects of their command of the written language (such as correct comma usage) to want to risk having a go at editing other people's questions or answers. (Such lack of confidence may or may not be justified.)

4) Some questions are formulated so unclearly that users may be in doubt about what the questioner is actually trying to ask. Most such users will be likely to avoid any possibility of having to defend/amend their editing of such a question in response to feedback from the OP or other users of the site. They might be more willing to venture an answer to the question, if it interests them enough despite its lack of clarity, than to amend the question itself.

Overall, I think that motivating more people to edit more postings (especially defective questions) is not going to be very easy.

Finally, it should be pointed out that your summary of the editing stats only considers the total number of edits per person. It does not take account of the length of time that each person has been active on the EL&U site.

If you analyse the rate at which people edit postings, there is much less variance across the individuals in your table of 'most active editors' than the gross figures suggest.

There's nothing wrong with encouraging folks to contribute to the site in new ways, but a lot of this question seems to be geared at highlighting that only a couple people are doing the bulk of the edits, as if that's somehow a bad thing.

Editing, deletion, tag cleanup, etc. - these are privileges that are earned and can be exercised when you choose to. This is reflected by the SE help and privileges explanation:

When should I edit posts? Any time you feel you can make the post better, and are inclined to do so. Editing is encouraged!

Nowhere in there do I see a statement that editing is required, that it's "our job" or responsibility as dutiful community members, or that Aunt Polly will come along and scold us if we don't.

Personally, I don't like editing. I'm not comfortable making substantive changes to other peoples' posts, and minor issues really don't bother me. No amount of badges, encouragement or scolding is going to get me to do it. But that's just me.

People contribute to the site in different ways - asking questions, answering them, flagging questions that should be closed, editing, managing tags, discussing things on meta, etc. It's ok to bring attention to tasks that might need a little love if folks are so inclined. It's not ok (IMHO) to imply that others are not doing enough to help the site just because they spend their time differently.

On English Language & Usage Stack Exchange, any correction of the English text is a relevant improvement and is therefore a justified edit. The term correction is generally defined as ‘action to eliminate a detected nonconformity’. Here, nonconformities may relate to orthography, grammar, punctuation, or typography.

Many posts contain only a few of these nonconformities. In many cases, users are prevented from making the necessary corrections by the annoying six-character limit.

Usually, most users just want to correct the characters that are clearly wrong. They do not want to add some arbitrary and unnecessary improvements of the text just to bypass this unjustified limit.

Hence, after some failed attempts, many frustrated users stop caring about making necessary corrections – even if six or more characters may be affected.

Therefore, in order to encourage more users to make relevant edits, the six-character limit shall be removed.

The fact that editing bumps a post probably stops 90% of my would-be edits. "Avoid trivial" is another 9%. -I would certainly love fix that spelt mestake for u, but they aksed me not too.

On a site with more than 2k, I'm very cautious about my instantaneously approved edits. On one with less rep I don't want to waste the time of an approver but I'm more apt to make larger changes knowing someone will check my work before it goes through.

Just some food for thought, I'm not sure what would change this behavior. Maybe it's something about being approved to get 2 rep and feeling appreciated when you get 10. Also, a rejected edit feels like one step above having a post get deleted.

Editing does not slake the thirst of altruists or rep-hounds; only pedants (who are somewhat discouraged for their "trivial edits") and users with an extreme devotion to this site.

For me, it becomes a toss up between not wanting to offend the OP with corrections to their work (while it's still a post being useful to them) and not caring anymore if they don't either. Greater recognition is required for something that's not so easily perceived; being helpful to maybe someone.

() This edit provides substantial improvements to the post. The editor will receive additional reputation.

'Cuz 2 rep is so, meh. And it's not like you'll ever get a 'thanks, me too' out of it, verbally or numerically. Points given to you seemingly by the system don't count towards your stackhead fix.

But a 2 that became a 4 will... (through the recognition of that by another human being, beyond the 'yea, this'll do, +2') perhaps accompanied with a stock message:

Great work! We look forward to more contributions from you!

"Thanks for your edit, [maybe you'll get points]", doesn't seem like it'd work as well as:

{you just got some points, whoopee!}...
{reads about why they got (even more!) points}...
{eagerly does more; better edits}.

Alternative: allow "trivial edits" for a +2. Anything superior gets a +4.

Personally experienced reason why you have less noise have less edits to perform on my own posts and my increased ability to make more, and better edits: (Thank you) @Mari-Lou A:

"If there's only a typo, I tend to leave a comment for the user. With experience you learn how posts are best formatted, what's a good question title, and what's not etc."

Teach a man to fish.

21
Do we need to write the better questions ourselves?
17
Extraordinary spike in low-quality questions by 1 rep users
14
"Are these sentences correct?"—Is a title like this enough reason to close a question?
9
"Inaccurate" edits that pass through the review net
5
Editing questions that will probably be closed or downvoted anyway
3
Is there a way to prevent minor edits from updating a question's date?
-2
Can we have regular site cleanups (weekly/monthly, etc.)?

1
How can I view all my statistics about the badges?
12
How curious are you? — or — Tallied ELU “Asking-Day Badges”–Proposal Results
12
How can we get more 10k and 20k users to help clean up the site?
19
“we tried to fix it”
1
Why can I edit someone else's post?
6
What is the current policy for answering questions?
1
Let's discuss this edit