Recently I came across the following question about "universal words" that are the same in all languages: https://english.stackexchange.com/questions/234744/universal-words Based off of the guidelines, "translation and non-English languages" are off-topic on this site. I flagged the question to be closed, but found that there was no option to tag this reason for closing. There is also no way to enter a custom reason, or to flag a question for off-topic in general. I ended up saying it was "blatantly off-topic", but I felt uncomfortable doing so since I feel that it's not really blatant; the person asking it probably thought it was on-topic. Therefore, I'm requesting the addition of a new close tag: "off topic because..." --> "Questions about translation or non-English languages are off topic."

Update: there were some comments, but nobody ended up writing an answer to the question. Based on a comment I left, the original poster asked the question on Linguistics Stack Exchange and promptly got an answer there. Based off of this, another good way to deal with many of these questions could be migration to Linguistics Stack Exchange. If you think this option is better, please say so in your answer.

This can't actually be done. The Blatantly off-topic reason is network-wide. However, it is the right option to use if the question is off-topic and none of the other options apply.

A bit of explanation may be worthwhile because "Blatantly off-topic" isn't something which many users will see. It only appears because you have less than 3000 rep and cannot close-vote. By the same token, you may not know what happens when you get to 3000 and are granted the privilege.

A user without the close-vote privilege doesn't see close in the post options and can only flag:

So that's what you have to do. 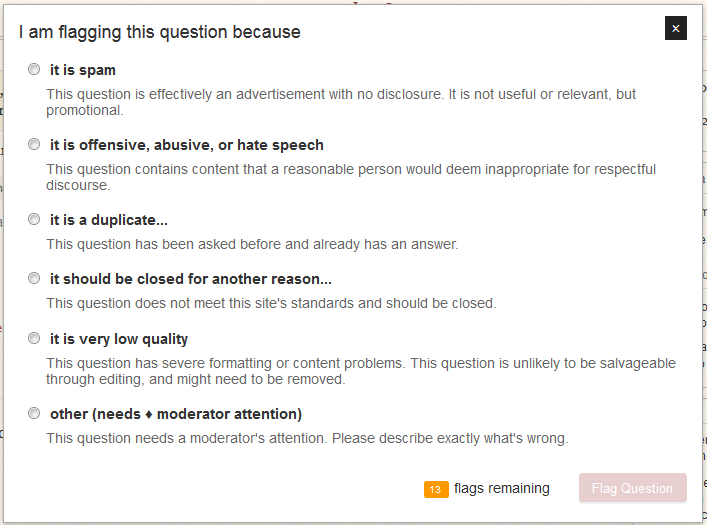 You can use "It should be closed for another reason...", which allows you to access a dialog very similar to the standard close-vote dialog (note that it still says Flagging in the heading; with the close-vote privilege, this says Closing): 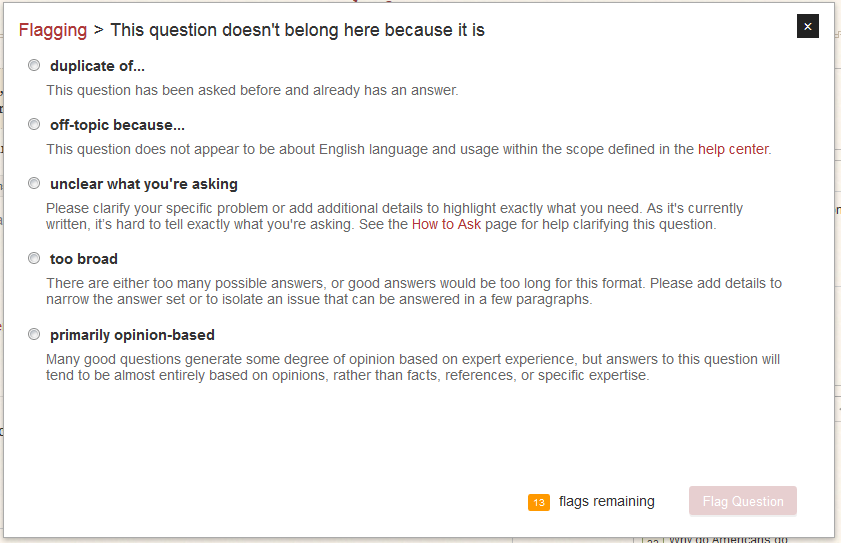 You can then choose "Off topic because..." and either select one of the standard reasons, and indeed "Blatantly off-topic" is the only one which might apply: 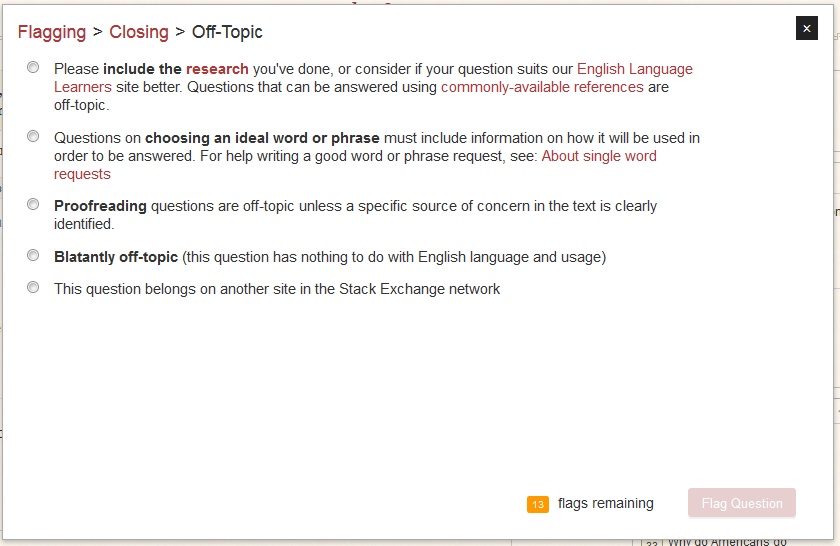 With the close-vote privilege, the dialog changes slightly because you are casting a real vote, and not merely queueing the question for review by others who can cast a vote. The comment you get to write in here is used as a comment on the question, and this is where "...because it's about a language other than English" might be stated. 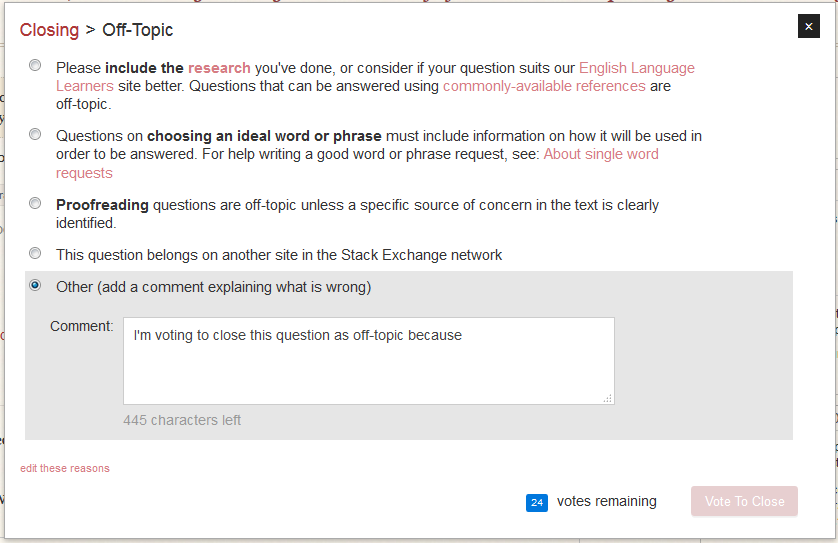 [The "edit these reasons" link is moderator-only and is the mechanism by which the first three reasons are changed. We only get three custom reasons.]

Once you have flagged as off-topic, the question is added to a review queue for members to vote on.

Note how your flag is recorded as "off-topic: This question does not appear to be about English language and usage within the scope defined in the [help/on-topic]," which is fine; exactly right.

A user with the close-vote privilege who clicks Close gets presented with the close-vote dialog to choose the reason, which includes the write-in specific option. If five members or one moderator vote to close, the question is put on-hold so that it can made on-topic if that's possible.

With regard to providing other migration paths, there used to be one from ELU to Writers. However it was so easy to get bad migrations that this path was removed during a revamp of question closing and it has not returned.

If you think that the question should be migrated — that is, even if it isn't blatantly off-topic there is a better Stack Exchange site for it — then use the moderator attention option and suggest it be migrated (and why that should happen).

You won't be able to raise another flag while this is being dealt with, but either the moderator who looks at it will agree with you and migrate the question, or simply close it; or he won't. If your flag is declined, then you should be free to raise an off-topic flag as above, in order to let others decide. If a migration seems reasonable and there is a possibility that the question will simply be re-posted elsewhere if it is not migrated, then flag for a moderator. We want to ensure that questions are not cross-posted, and only moderators can migrate.

11
Declutter EL&U's “Newest” Page
4
Proposal: Require a whitelisted URL to close as General Reference
4
Proposal: Add a “too basic”/“uninteresting” off-topic option
2
Why no “blatantly off-topic” close reason?
8
Why are there not all Off-Topic reason flags?
4
How do I change the subcategory of a flag?
14
Why can't we add video (or even audio) clips to posts?