This question, and another? (i.e. when are two of something better than one?)

Remember those rather amusing double toilets in Sochi? (O.K., I have no class. I admit it.) 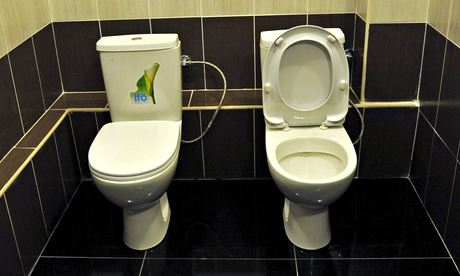 They made me (and millions of other people) laugh, because, well, it would be kinda awkward... one per is quite enough for me.

I kind of feel a somewhat similar awkwardness when I see (not a rare event) two answers by the same user to a single question on the main site here. While I can see this as perfectly acceptable on meta (or math, or somewhere where there might be two unique and equally acceptable answers), my sense of awkwardness makes me wonder if I'm being a killjoy.

This comment finally nudged me to ask this question.

So I looked it up at Meta.SE.

These Meta posts have conflicting answers.

[i]n general there should be one answer per person per question; if you need to amplify your answer, edit it! - Jeff Atwood (Oct 8 '09)

When there are multiple possible answers, I crowd them impolitely into one answer box. What should the etiquette be on the main site here?

I promised you a second question, and in keeping with my lack of class, here it is: Which seat has been left in the proper position? Bonus points if answered correctly!

I also find it hard to vote when an answer is actually two answers. I respect your approach however I would suggest that you give more consideration to giving more than 1 answer as it may be easier and more usable for in the community at general. I prefer multiple answers, even if from the same person to answers that contain multiple answers within them.

I disagree; I have no problem with that answer as is.

As is clearly stated in the first line, the answerer is offering:

two adjectives that may be useful

Splitting them into two answers might make it easier for voters who want to upvote one suggestion but downvote the other. But the end goal is to provide useful answers to the O.P. (and others who are interested in the question), not to the voters. I don't think that splitting that answer into two would make the result any “more usable for in the community at general.” Either way, I have two suggestions – take 'em or leave 'em.

Incidentally, the upvote button hints are:

I think an answer can be “useful” even when one of the more-than-one suggestions isn't to someone's liking.

One more thing: I often notice a "synergistic effect" when people list more than one suggestion in a single answer – the answer "builds upon itself," in a way. That could be lost if every word- or phrase-request answer was split into multiple entries.

Note to the voter: Perhaps you think that my point about synergy is a really good one, while my earlier discussion about usefulness was off-the-mark. If that's the case, I apologize for the quandary I've put you in by combining those two answers into one.

Generally, it makes sense that one question will have one answer if the question has been asked in a fashion that makes it on topic. This is why the guidelines are geared toward encouraging users to edit and expand on their existing answer rather than adding a new one.

However, there are certain kinds of questions where more than one answer is acceptable. Most notably on this site is the single word request, which I dislike as a category particularly because it invites a slew of answers, all of which may or may not fit the bill. There are other questions though where for instance a descriptivist answer and a prescriptivist answer would offer distinct perspectives that would inform the asker.

My opinion is that if you are answering a question of the type What word is .... then each answer should only offer a single word. If there are a number of other words that may fit the bill then either add another answer or leave it for others to provide a different choice.

I rarely upvote answers that give a choice of two or three words except in the event that one of those words is perfect (in my opinion) and I'll upvote and add a comment explaining the upvote is only for that one word, not the rest.

Saying that, I wouldn't particularly like to see this answer https://english.stackexchange.com/a/235882/71783 turned into a score of individual answers by one user, no matter how well written they are.

I'm sure I've also broken my own 'rule' on a number of occasions where I've offered a 'multiple choice' answer.

As to the picture - the one on the right is in the correct position, anyone can use it without touching the toilet with their hands, a closed toilet lid can be quite a pain for someone with disabilities and you also get the opportunity to see the contents (or lack thereof) of the bowl before committing to that particular cubicle, there's often a nasty surprise lurking under a closed toilet lid. An added bonus is that dogs can get a drink.

I can't recall doing it more than once (though I may have done; it seems like no big deal to me), but at the time I thought I had reasons for posting this second answer a week or two after my first one. I also posted a bounty which seems to have gone down the toilet, so it was a pretty weird question all round.

In retrospect maybe it wasn't such a good idea, since there wasn't much support for my "supplementary musings". But in principle I can't see any reason to object to multiple answers by the same poster, provided they're recognisably "different" answers.

5
When can two questions be in the same question?
5
Are 'What is a better way to write this?' questions allowed?
46
Is the EL&U community overzealous about closing/down-voting questions?
1
How to judge when is it better to delete a question rather than improve it
0
What is the etiquette on moving a Question from another site to this one?
6
Why must we assume that earlier answers are better, especially when they are not even related?
0
Why was a question about two English words closed and returned to another site, without comment?