Why was the “channel name” question deleted so quickly?

I'm asking this out of genuine curiosity and not advocating or evangelizing for any action.

A question recently appeared on the front page, and was deleted 10 minutes later.

Why is it spelled "channel name" instead of "channel's name"? 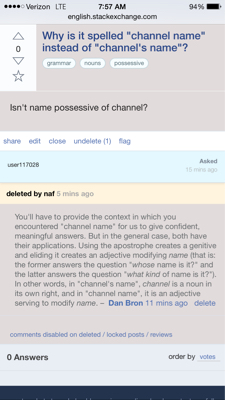 The question was fairly ordinary, but I could see how it might have attracted an interesting answer from one of our resident linguists. In any case, nothing stuck out about it to me that called for deletion; it certainly wasn't offensive. There weren't even any comments on it except a quick one I shot off asking for more context.

Does anyone know why this question was deleted, and so quickly?

Again, I'm not asking for your undelete votes, because I don't know if the question was deleted for a good reason.

The answer is in the deletion message. There are only two ways that a single user can delete a question: one is if they are a moderator; the other is that the asker removes his own question.

That's what happened here. There's no diamond, so it's a self-deletion.

What is slightly odd is that, having also deleted their account (hence the grey/unlinked user name under the question), the old username is still used in the deletion message.