Cross-posting simultaneously on ELU and ELL

There is currently a question posted on both ELL and EL&U as "an experiment" in the words of the poster of one of the questions:

I have plariarised your question, kind of, here. It's really an experiment to see whether the answers here are much better than the answers on ELU!

There is a bounty associated with one of the questions, on EL&U. Both questions are recent, and open, with no accepted answers.

On ELL, see “and build upon that, but build they have”: Should that 2nd “build” be “built”? The corresponding question on EL&U is "Wrote it I did" Is this grammatical?

I found it rather confusing to read comments on EL&U referring to "Pazzo's answer" when there was no answer by Pazzo on EL&U but rather, on ELL. Similarly, there is an entire discussion on EL&U about an answer by F.E. on ELL and the answer's use of CGEL. This would have been (and was!) completely opaque, if I were not to have done a search on ELL to understand what the basis for it was.

Is this acceptable? It is not allowed according to StackExchange rules.

A really good question got posted on ELL about why some present perfect sentences on the internet have preposed verb phrases that don't use past participles (main verbs that have been moved to the front of the sentence that aren't past participles even though the auxiliary verb is have). Here's the example:

It's quite a sophisticated question, really, definitely one worthy of any linguist or serious enthusiast of English language. However, there was an even more interesting type of similar example that sprung to mind for me:

In this example, if it's grammatical, we see the verb form wrote as a complement of the verb did. As in the example before, it has been preposed. Normally, when we see another verb as the complement of did, we expect to see a verb in the plain form. Here, it's in the past simple form.

Now, while there are vetted grammar sources which talk about the first type of example, there are none that I know of, or have been able to find, that talk about the second, so I wanted to know what other linguists thought about this example. So I posted a question here on EL&U.

However, in a way, my question derives from Cookie Monster's question (they're the poster on ELL). Here's a picture of them so that they get the recognition they deserve: 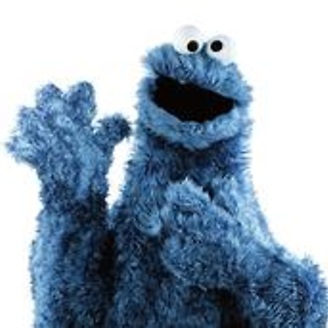 Anyhow, to let them know about the question I was posting here, to pep them up, I left a tongue-in-cheek comment to make them feel good (which they deserved to do) under their post. After all, why wasn't I posting the question there on ELL? The answer is that I think this particular question (not the original) needs the attention of some dedicated linguists or language enthusiasts.

I am sorry for making warm and friendly tongue-in-cheek comments to learners on ELL, especially if it offends the linguists on this site, and never again will I joke about ELL posters being even better than EL&U ones - because that wouldn't be funny for an ELL learner who's trying to learn English. Sorry.

I'm going to stand in the corner and flagellate myself with whips twisted together from medieval Latin dictionaries.

1
Could we migrate or cross-post excellent questions and answers to ELU from ELL?
4
One answer to a Q. is suited to ELL, but the other answer is suited to EL&U
6
Cross-posting on ELL: which to close first?

43
Should we have a migration path to ELL?
3
Too few questions being migrated to ELL?
8
Does ELL migrate questions to ELU?
6
Cross-posting on ELL: which to close first?