Re the psychology of the viewer: does anyone understand why the "candy and nuts" question got 123,000 views?

Does anyone understand why Origin of the idiom "If ifs and buts were candy and nuts"? has 123,000 views? It seems totally out of line with the number of views for other Questions. Do we understand anything about the psychology of the viewer?

When I went digging in the archives, and saw that question pop up, I immediately found it intriguing on several levels.

First, I don't think I have ever heard the nuts and candy version, which didn't surprise me all that much because I'm not American. Secondly, the existing answers didn't really do the post any justice. Thirdly, the post was closed because it was deemed to be general reference question, which I disagreed with.

I suppose if I had come across that phrase, I too would be tempted to look it up, in any case I Googled the aphorism, and sure enough it was credited to Don Meredith, and quite a number of results repeated The Phrase Finder's answer. However, on Google there were also a number of inquiries connected to the Big Bang Theory. Apparently there is a 2010 episode which has Sheldon using the Meredith's catchphrase, and TBBT fans were no doubt Googling online to find out more about it.

Fans must have liked the phrase because there's even a T-shirt which you can buy online with the "catchphrase". There is also a FaceBook page. I don't know if there's a meme, but I wouldn't be surprised if a few (gif) images of the Sheldon and Leonard exchange were not shared online. The Big Bang Theory has a huge following, it's watched worldwide, geeks, nerds and kids adore the show. I was a big fan myself, but that punchline escaped my attention (I have the episode at home).

My hunch is that the impressive number of views is due to the show's popularity. 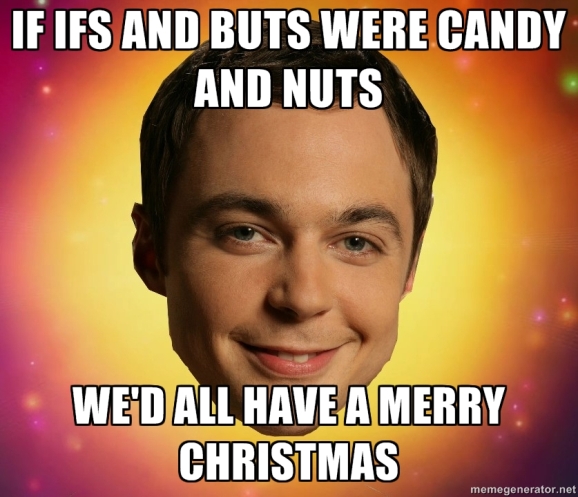 First, it has had 4 years to accumulate views.
Second, it is a snappy rhyme.
Third, I never heard it in my whole life, and I use such sayings (if wishes were horses, etc.) way too much (kids and all, you know.) I'd click on it simply because I never heard it before and I'd be intrigued.
Fourth, people sometimes search sites! "If, and, but" are common enough that this one might pop up and catch one's eye.
Finally, and the real answer is: there is no one psychology to explain the phenomenon. People have different motives for clicking on things, and I'm guessing any espoused reason is mere guesswork.

0
Why was question about origin and meaning of "rackers" closed as basic?
6
Is the "protected" question tool overused?
12
Why the lack of voting on questions at ELU?
4
Has anything like the Cake Walk question happened on ELU (or any other SE) before?
3
Getting Some Context About The Application
22
Jaded user meets new contributor…
12
Hell is hot, but is it funny?
4
Why are the comment sections not being moderated better?