Should I approve or reject trivial edits from anonymous users?

This popped up in my "Review Suggested Edits" Queue... 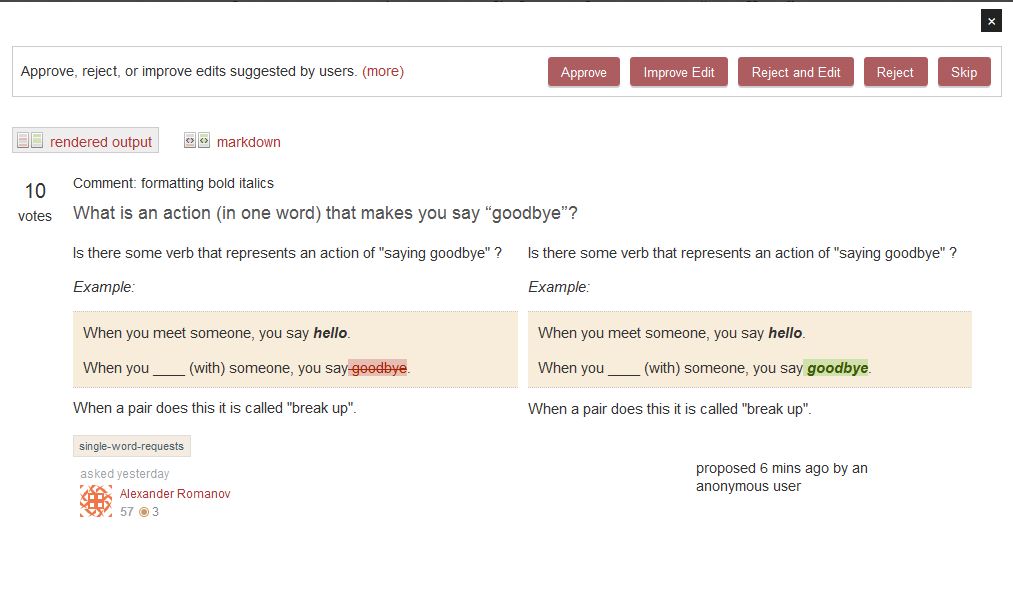 The edit has only minor formatting improvements (the word "goodbye" has been bold-italicized) to the earlier edit. Incidentally, I had edited the question previously.

How should I handle such edits from anonymous users?

The "goodbye"-to-"goodbye" change you mention is indeed exceedingly minor, but given that it brings goodbye into parallel with the way hello is handled in the twin example immediately preceding it, I would have accepted the change. Minor as it is, a change to establish symmetry of this type removes any potential distraction that the asymmetry might cause a reader, so I think it's worth doing (on my questions and answers anyway). But I'm a copy editor.

The countervailing argument, I suppose, is that many minor edits that EL&U newcomers suggest aren't improvements of any kind: either they leave the post no better off than it was before or they make it significantly worse. If you feel that nuisance edits are a big enough problem at this site that we should discourage any edits that don't save the author from embarrassment, then you should probably reject minor edits whether they are marginally useful, neutral, or harmful.

I don't feel that way, and I'm okay with minor edits that makes a post slightly more consistent internally. I also don't begrudge the editor the reward of a point or two of reputation for a minor improvement—if it is indeed an improvement. When I edit other people's posts at this site, I try to limit myself to nontrivial things (though I consider adding block quote formatting and hiding URLs in links to be nontrivial for readability). I don't approve of changing one consistently handled style decision for another, however, because EL&U doesn't have a style guide for matters such as serial commas, single vs. double quotation marks, and punctuating inside vs. outside quotation marks.

Because it doesn't impose a minimum reputation requirement for editing posts, Stack Exchange invites everyone to participate in this task. I can imagine this becoming a burden if nuisance edits grow to epidemic proportions, but I don't see that happening. I've been participating regularly in Review queue vetting for about a year now, and I'm only at about 230 Suggested Edits reviewed— because there just aren't that many of them compared to items in the other Review categories.

Though I don't know what Stack Exchange's thinking was in putting question and answer editing within the reach of first-time site visitors, I imagine that the goal was to encourage participation in an easily reversible way that might also build up interest in the relevant SE site and reward efforts to make simple technical improvements as well as more-significant corrections.

Higher-rep site participants are essential in this process, to assess whether an edit is useful or not. But their reward for this rather tedious work is a series of copper, silver, and gold badges at various service milestones; anyone who seriously dislikes this kind of work doesn't have to participate.

As I write this, the Review page lists the following queues awaiting review: 116 Close Votes, 3 Reopen Votes, 1 First Posts, 1 Low Quality Posts, 0 Late Answers, and 0 Suggested Edits. This is typical except that First Posts and Low Quality Posts sometimes fluctuate upward into the very low double digits when traffic is light on the Review page. Given that the stream of suggested edits is so (seemingly) manageable, I don't see any reason not to assess each one on its own merits and to approve ones that introduce even minor improvements to a post.

I happened to be (again) the one who rejected the suggested edit in your question. I rejected it partly because there was no improvement and it was so trivial, but more importantly it was suggested by an anonymous user. The question was not wordy and short enough to be well understood.

One thing I found very strange when I started to review suggested edits was many of them were suggested by none other than anonymous users. I asked my self, "WTH?! Why is it even allowed?" Why are anonymous users allowed to edit questions?

And I found an answer to it. Anonymous users are permitted to make suggested edits. Because we have good users standing at the gates preventing the bad edits getting through...

Based on my rather short experience, edit suggestions by anonymous users were not very constructive nor helpful. Probably less than 10% were. Therefore, I always reject it. I have never approved a single suggestion made by them. Most of them were one of the followings:

How to edit a post largely depends on your personal style and preference. I do believe that we are allowed to review a suggested edit because we have sufficient reputation points to do that and the community trusts us. The decision on whether to approve it or not is entirely yours.

Do you want to stop your dog from begging for food at the table? Don't feed him! Same principle.

1
Why are anonymous users allowed to edit questions?

3
The Review Queue II: This Time It's Personal
6
users moderating changes to their own questions
4
Why are some users with 10k+ rep allowing minor, and I mean, *very* minor edits to pass through?
9
"Inaccurate" edits that pass through the review net
8
Curious why my suggested edit was rejected
15
How should reviewers (and other users) handle SLAs to SWRs?
5
When is it reasonable to reject a suggested edit that fixes a broken link in a LQ post?