Reasons for or against deleting a question plagiarised from another site?

See this question (deleted since)it's a verbatim copy-paste of a question asked somewhere else 4 years ago.

A law enforcement officer is investigating a case. The officer takes clues such as photographs and pieces of paper and pins them to a wall or cork board. Yarn or string is stretched between some of the pins to indicate a relationship between those clues. What is this investigative process or technique called?

Although it does not seem to go against ELU rules, I feel uncomfortable that op did not reference the original source. It's dishonest.

My gut feeling would be to flag it for deletion (clicking "other causes" as suggested), but for what would be the reasoning for deleting exactly? How does it hurt ELU or anybody that a question was plagiarized?

Any argument for or against it?

The reason why you would flag the question is to help maintain the quality of the questions on the site (and tangentially our community's reputation). If a poster is unable to phrase their question in their own words, they are probably unable to respond to requests for clarification or otherwise engage with their question and the folks answering the question. I would see it as an attempt to farm reputation, which I think should be discouraged.

There may very well be ethical and legal concerns, but I think they are secondary concerns. What if the original author comes to EL&U and finds their question "stolen" word for word? Do you think they'll want to be a contributing member of the community? Who would likely be the more valuable member of the community - the original author or the plagiarizer?

If the question had referenced that question and the poster added "I found this interesting question and it didn't have any suitable answers on the other site - I did this research but I still couldn't find anything." I think it would be perfectly fine to leave it. Most free community sites require you to allow certain uses of your contributions, so it is different from, for example, plagiarizing a self-published blog. You still have to attribute the content in most licenses though.

Edit: As for whether or not plagiarism hurts the site, I have three issues with it:

1) It's not good for the site. As you say, it's dishonest. It's taking credit for other people's work, and it makes us look bad.

2) I've often wondered if people who plagiarize questions verbatim are just trying to accumulate rep points. It doesn't feel like the question is based on an actual problem that they face.

3) In cases where a good answer is already provided at the original site, why waste people's time here formulating an answer to a question that has already been adequately answered?

If someone thinks the question is interesting enough that it ought to be archived on ELU, that's fine, but at least paraphrase it, and point to the original to give credit where credit is due.

As for how to flag it, why not flag it "in need of moderator intervention," and let the mod team decide what to do from there? 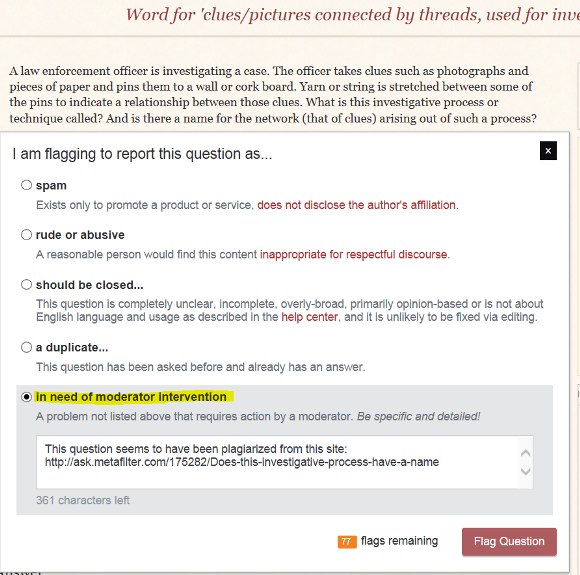 Without a doubt, I can tell you that plagiarism is bad, and it does go against our rules (which are network wide). The Help Center addresses this specifically:

Plagiarism - posting the work of others with no indication that it is not your own - is frowned on by our community, and may result in your answer being down-voted or deleted.

(The wording reflects the fact that most acts of plagiarism are answers, not questions.)

The correct action depends on context.

In this case, it doesn't seem like it was in good faith. My experience with plagiarism is on Stack Overflow, and the reasons I see for doing this range from spam (cleverly disguised spam may live longer than blatant spam) to avoiding new user restrictions (and post-bans).

Mod flagging was the right action here. For more information, see What to do when plagiarism is discovered.

I typed up an answer for this, but unfortunately, it seems that the question has already been removed. Judging from OP's reluctance to flag it 1 hour ago and JR's screenshot, I'm guessing it was him. This is disturbing on a moral front. This question was intended to discuss whether the question in question should be flagged. It was not intended for others to flag it without thought. I am disappointed in this outcome, as I would have liked to see the answer to the question, if there was one.

Here was the answer I had:

I wouldn't flag it because it's not a substantial theft. Yes, that is subjective, but there's no ideal way to approach this. It's not creative property; it's merely describing a situation. Think of Wikipedia, which is all released freely and legally permitted to quote without sourcing. Although this is frowned upon socially, there'd be no basis on which to report it. I'd treat this question in the same way, although I am not aware of metafilter's policies.

Additionally, if the question was not answered on another site, and the reader wanted an answer, all he can do is repost it elsewhere. It would be fine if he sourced it, but it would simply add irrelevant information to the post and make people visit another site.

In short, it is always good to create new discussion, and that's all I see here, no mal-intentioned plagiarism. I find that a flag would be frivolous and would halt/remove discussion that may have led somewhere.

11
What is plagiarism? How do I avoid it? How do I address it when I see it?

6
[Etiquette]Edit our answer with information from another answer?
4
Valid question closed as 'too localised', requesting reasons for being out of scope
8
On custom close reasons and site governance
0
What is the etiquette on moving a Question from another site to this one?
2
What if the dupe is on another site?
30
Why was there such a negative reaction to this question: "Word for a person from another race?"
6
Reasons for dupe-close on question with the tag question-tag?
7
Editing an answer to remove a section plagiarised from your own answer?