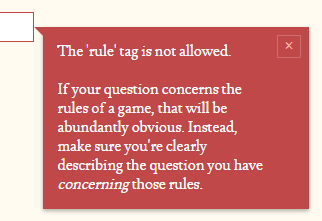 30
Blacklist the [words] tag
11
Should we burninate the [spelling-checker] tag? (0 posts left tagged)
17
Should the 'language' tag be deleted?
5
Call to action: Let's tidy up the currency tag
6
List of tags that are blacklisted, burninated or under discussion

11
"Word" tag -- useful?
10
Editing questions: Good practice to bold key phrase or sentence in example?
3
Delete "word" tag?
6
users moderating changes to their own questions
6
Why was a question on uncommon usage moved to the English Learners stack-exchange?
1
Can we allow questions asking for expressions or words that do not, or may not, exist (yet)?
1
Close reason for Single Word Request question
9
Tackling the drive-by tag problem
11
Should we burninate the [spelling-checker] tag? (0 posts left tagged)
4
“Why is a raven like a writing desk?”