correction has 74 questions and a majority of the questions seem to be intended to ask about grammaticality, correctness (not correction) and proof-reading for some phrases and sentences, for example:

Could you please tell me the answer and why?

Where does the [sic] go in this sentence?

I can't list all the questions. Would it be OK to synonymize correction with grammaticality since we don't allow proof-reading and there is no proof-reading tag?

I think it is more efficient than unnecessarily editing all the 74 questions just to remove the correction. Thoughts, please?

If that is indeed its primary use, it should be removed, not synonymised — and probably blacklisted.

(And yes, that will bump all those questions. But that effect is temporary.)

This would be a terrible idea. If we would make correction a synonym of grammaticality the auto-suggest shows the parent tag. We already set this unfortunate precedent with correct and correctness. Whenever anyone types correct in the tag field this shows up. Making the people believe they tread the same path as nearly 4k other users before.

Burnination would lead to this, a first road bump when creating shitty correction questions: 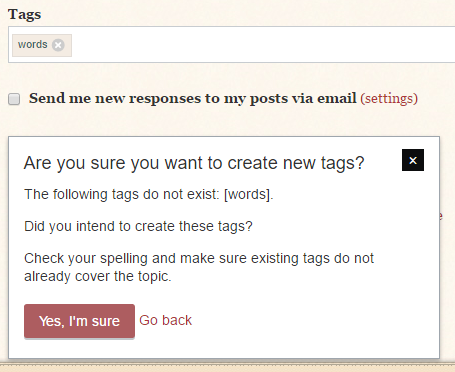 And subsequent blacklisting would lead to this for the persistent user: 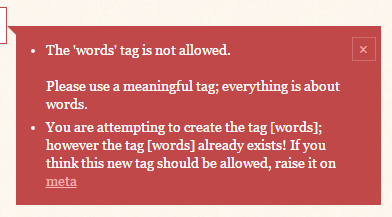 Thus, the decision to synonymize would create the impression of 4k precedents while burninating and blacklisting has a serious chance of stopping such bad questions.

1
"Is it correct to write x" questions - can we require people to explain why they are asking?
29
The Great ELU Tag Clean-up Proposal of 2014
1
Citing sources of sentences
16
Extraordinary spike in low-quality questions by 1 rep users
0
Request for reconsideration of migration - Grammar question
20
Should we amend the help text to expand on proof-reading?
3
Is the 'email' tag obsolete?
16
Potentially improved "proofreading" close reason (for the banner)
7
Grammaticality and Proofreading