No questions for Linguists on EL&U

I can think of one method that might work. Certain types of question, for example grammar, syntax, phonetics and etymology questions – that may often be answered by linguistics professors or real language enthusiasts – should be protectable by users who have sufficient reputation in relation to that tag, or related tags in order to stop them being closed by careless users.

See my close-reason on ELL below for where this question belongs. 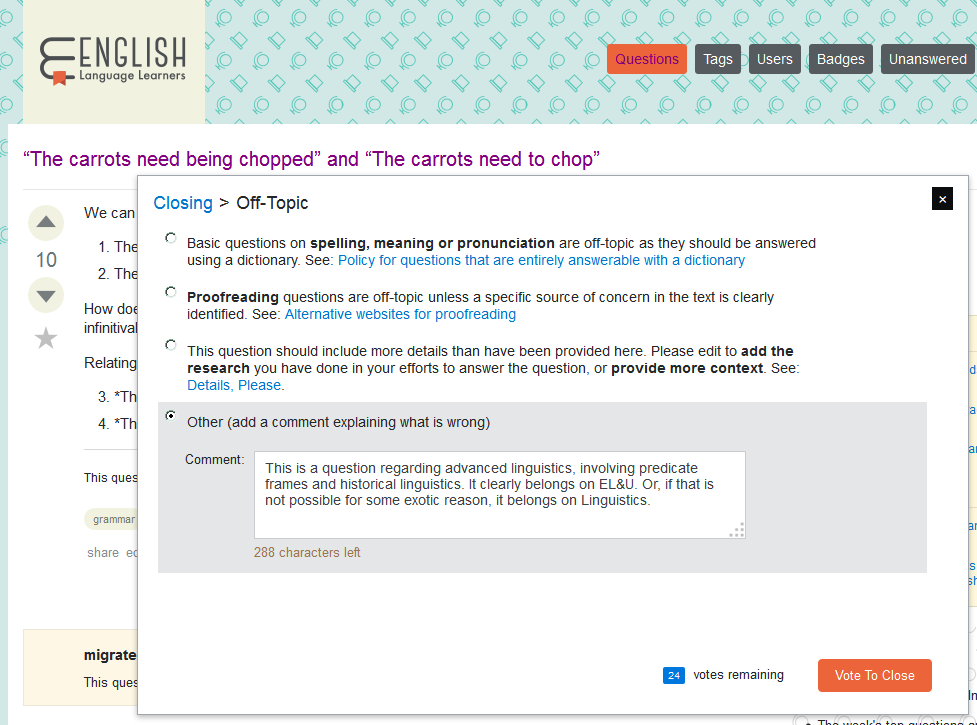 Emphasis in bold mine

Apparently, questions which actually ask about aspects of the English Language which might be interesting to linguists, etymologists or serious language enthusiasts are now banned on EL&U.

No, that's not true.

So if we really want to be picky, the question was not banned, it was not closed, but it was relocated. Cerberus has offered a solution; however, I believe only the mods at ELL can bounce this question back to EL&U. (see update)

Certain types of question, for example grammar, syntax, phonetics and etymology questions – that may often be answered by linguistics professors or real language enthusiasts – should be protectable by users who have sufficient reputation in relation to that tag, or related tags in order to stop them being closed by careless users.

Who or what defines a "real language enthusiast"? Presumably any user who has been a member for at least six months and has answered perhaps thirty unrelated questions could qualify.

Let's look at the numbers. The first user who cast their vote to close the question has over 10,700 rep; the second has just over 6,000 rep and has been a member of EL&U for almost six years. The third user has earned nearly 10,500 rep, but the fourth is a relatively new member (only 4 months); and the last user, whose vote meant that the question was doomed for migration, even if they cast their close vote for a totally different reason, has also been a member for nearly 6 years and has nearly 40,000 rep to their credit.

Objectively speaking, four out the five users have the necessary experience, and a passion for the English language which qualifies them as being fully-fledged enthusiasts, and there may even be a graduate of English or linguistics hiding among them for all we know.

I think each and every one of these five users has as much right to cast a vote as an esteemed linguist or student of linguistics. In addition, not one of the five users has the SWR dupe hammer, but each and every one one has SWR as their number one tag. On the other hand, Araucaria's most successful tag is pronunciation, only tchrist♦ tops him, but Araucaria has as much right to close a single-word-request, meaning or word-choice question, as any user who has earned that same "privilege".

The SE system for closing questions as is, generally works. The type of mistake that happened on this occasion is rare, but it will happen again, no democratic system is perfect. And ensuring only a specific group of users the privilege of closing or reopening linguistic or grammar questions, would smack of elitism to me.

Nevertheless, there is always room for improvement and a simple solution is the following. Before casting a vote to migrate a basic English question to ELL, read the entire question, not just the question title, and ask yourself: "Would I be able to answer that question satisfactorily without doing any research?" If the answer is "no", the question should probably stay on EL&U.

UPDATE #1
The question is back home. Yay!!
Among the five users who cast their votes in favour of migration (it was visible on the ELL page) are two who have earned the SWR dupe hammer, one of them was me. The other was JOSH (who I don't think will mind my mentioning his name). If we had been excluded from casting a vote, it is likely that the question would have taken longer to migrate, so bear this in mind the next time you (Araucaria) are tempted to take a (gentle) swipe at those users who may also have the SWR dupe hammer. We kinda get it when a question is worth saving.

For now, the "carrot" question is safe.

UPDATE #3
The question has been locked for 21 hours, it is now impossible to edit the question, upvote any comment, or cast any vote on the actual question itself. And no new answers can be submitted. :(

Related: Please can we take more care over duping

I don't think it is appropriate to call other ELU users EL&U. Single word-request junkies. That's name-calling and it's against Be Nice policy:

Certain types of question, for example grammar, syntax, phonetics and etymology questions – that may often be answered by linguistics professors or real language enthusiasts – should be protectable by users

I don't agree with this idea. Not only will it be against the community-driven mechanism of Stack Exchange, but also it could lock basic and ELL questions such as Can I use "has" after being a noun?. This question has been asked and answered repeatedly. I wonder what makes you think this kind of basic learner's question should be answered again on ELU. Why is it so difficult to research and find references for the question like this? Singular vs. Plural with Multiple Gerunds as Subject (IE: [Gerund] and [Gerund] are/is [something].) and Gerunds and Infinitives: Their Noun Roles. Should this question be answered by linguistics professors or real language enthusiasts? I don't think so. This question should have been closed as duplicate or lack of research. (Note the links above are the first two I found after searching "verb agreement after gerund/ing").

I also feel that people whose primary tag is for SWRs shouldn't be able to close-vote questions which don't have a SWR tag, but that's another question

Users who continuously ignore the guidelines of ELU and answer off-topic and basic questions shouldn't be able to vote to reopen a question, either. You should raise this issue on Meta SE.

7
Please can we take more care over duping

12
Problem with faq: EL&U audience - experts only or students too?
87
This is not a site for "serious English language enthusiasts," and it never will be
19
ELU tagging guideline
30
Proposal for selective blacklisting
4
Three SWRs suddenly closed for being POB
14
Tags! Huh, what are they good for?
45
Warn people of the rules for [Single-Word-Requests] before posting
7
Grammaticality and Proofreading
3
New user asks: Are requests for proverbs and sayings (as opposed to single-word idiom requests) on-topic?