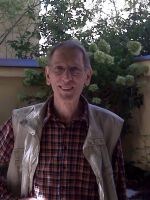 Interested in English and French, education as a teacher for English and French, for some years a private teacher for adults, now no teaching activity. I have taught Latin to pupils and have had a look into several languages, eg Dutch, Afrikaans, Italian, Spanish, Greek, Russian, Arabic, Turkish, Hungarian, Sanskrit, and Esperanto. I would like to know a bit more about Chinese, Japanese, some other languages of South East Asia, and Suaheli, but time is lacking. I have great interest for etymology, which I have been interested in for 50 years, and often my views differ from those in etymological dictionaries. I'm interested in the mysteries of grammar, in idioms, in new methods of teaching languages and I am enthusiasted by the possibilities the Internet offers and modern electronic devices such as electronic dictionaries. A pity that Youtube has not discovered yet that videos are an ideal means for language learning, but they don't seem to have any interest in this side of videos.